In their infatuation with Sister Friede, the Corvian Knights swore to protect the painting from fire, and to this end, took to the execution of their own brethren.[1]

Corvian Knights are tall avian warriors that tower over their lesser brethren and are considerably more intelligent and fearsome. They exist in two variations, one that wears a hooded robe and wields the Crow Quills, and a naked variant that wields the Crow Talons.

They can be encountered throughout the Corvian Settlement exterminating other Forlorn Corvians, although they will quickly turn their attention to the player.

Found throughout the Corvian Settlement in the Painted World of Ariandel.

After Sister Friede arrived in the Painted World, the Corvian Knights chose to loyally serve her and assist in her mission to let the world rot. Their loyalty was so devout that they willingly slaughtered their own kin if they were perceived to be a threat.

Corvian Knights are incredibly agile opponents and will regularly backflip away or leap over the player to disorientate them, often following up with a lunging stab. Their flurry of blade attacks can rapidly inflict bleed, even when guarding through a shield, so it's not recommended to attempt to block their strikes. From a distance, they will throw several knives and will often perform this attack if the player attempts to heal or use an item.

The robed Corvian Knights will pursue and eliminate the lesser Corvians around the settlement, although they will focus on the player if alerted. The variant wielding talons is often encountered hiding upside down under bridges and ceilings, so it is advisable for the player to be mindful of their surroundings. 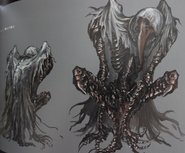 A Corvian Knight waiting in ambush.

Retrieved from "https://darksouls.fandom.com/wiki/Corvian_Knight?oldid=330218"
Community content is available under CC-BY-SA unless otherwise noted.