Chasm of the Abyss - Sif

The steel greatshield used by Knight Artorias, who succumbed to the Abyss. Artorias, deeply scarred by the Abyss, used this to form a barrier to protect his compatriot Sif. Although this drained the shield, its magic defense remains high.

The Cleansing Greatshield is only available in the Artorias of the Abyss DLC. Upon falling through an illusory floor in the Chasm of the Abyss, Alvina will appear momentarily. She will lead the player past Humanity Phantoms to an illusory wall which hides the room where Sif is trapped. Clear the room of all enemies, then go back to Sif, who will then be able to warp away. Upon doing so, Sif will leave behind the Cleansing Greatshield.

The Cleansing Greatshield has the weakest physical defense of any of the greatshields available. However, its defenses against magic and the other elements are all very good, even for a greatshield. This means that its effectiveness will vary considerably depending on the type of damage a particular boss will deal. It has a heavy deflection and a standard bash attack. A major downside to this shield's use is that upgrading will not raise its stability value, only the damage will be increased.

All things considered however, this is a vastly inferior version to its pristine self, the Greatshield of Artorias, as the latter, though not possessing the same high values as the Cleansing Greatshield, boasts extremely high stability, better Resistance Defenses (as it will block 100% Curse), and negates physical damage entirely, though it does require slightly more strength and has slightly higher weight.

*While shield is up the player is actively blocking 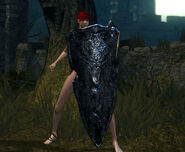 Add a photo to this gallery
Retrieved from "https://darksouls.fandom.com/wiki/Cleansing_Greatshield?oldid=319166"
Community content is available under CC-BY-SA unless otherwise noted.