watch 01:49
Who is Chosen Undead?
Do you like this video?

"Thou who art Undead, art chosen... In thine exodus from the Undead Asylum, maketh pilgrimage to the land of Ancient Lords... When thou ringeth the Bell of Awakening, the fate of the Undead thou shalt know..."
— Oscar, Knight of Astora

The Chosen Undead is the player character and the protagonist of Dark Souls.

In the trailers, artwork and promotional art for Dark Souls, Oscar of Astora is depicted wearing the Elite Knight Set as well as using the Astora's Straight Sword and the Broadsword along with the Crest Shield as their main weapons. This would eventually come to be the Chosen Undead's canon appearance.

However, in the game, the Chosen Undead's appearance and attributes are determined by the player, including their face, sex, origin, starting class, and equipment.

They are portrayed as an archetypal "silent character" who doesn't have any sort of spoken dialogue during the game (aside from making some grunts or cries whenever they are hurt or killed). This trait was made on purpose by the developers so that the player could feel more identified with the character.

The Chosen Undead is a descendant of the Furtive Pygmy, one of the original Lords who claimed the Dark Soul.[4][5]

After becoming an undead the player character was imprisoned in the Northern Undead Asylum. They are rescued by Oscar of Astora, who drops a key into the player's cell so that they may be freed. After escaping from the Asylum Demon, they encounter a fatally wounded Oscar, who tells the player about a prophecy, stating that an undead shall partake in pilgrimage to ring the Bells of Awakening.

Oscar gives the player an Estus Flask and dies in peace, trusting the Chosen Undead to take his place. After defeating the Asylum Demon, the Chosen Undead escapes the asylum and is flown to Lordran by a Giant Crow.

The Bells of Awakening[edit | edit source]

Upon arriving in Lordran, the Giant Crow drops the Chosen Undead in Firelink Shrine, which acts as a hub for the player for the rest of the story. After hearing the location of the Bells of Awakening from the Crestfallen Warrior, the Chosen Undead sets out on their journey. Various characters can be encountered throughout Lordran, such as Solaire of Astora, a charismatic warrior seeking "his own sun"; the treacherous knight Lautrec of Carim; and Siegmeyer of Catarina, an absent-minded knight who frequently finds himself in danger.

On a rooftop in the Undead Parish, the player slays the Bell Gargoyles and manages to ring one of the bells. Later on, the player makes their way deep into the infested swamps of Blighttown. There, the player defeats the Chaos Witch Quelaag and rings the other bell. After ringing both bells, the gate to Sen's Fortress is opened.

After passing the trials to ring the two bells, Kingseeker Frampt, a primordial serpent, appears to task the character with another quest before they are deemed worthy as Chosen. The player must go into the city of Anor Londo and retrieve the Lordvessel from Gwynevere, Lord Gwyn's daughter. In order to complete the quest the player needs to traverse Sen's Fortress, an old proving ground built by the gods. After passing through the fortress and its many dangerous traps, the player battles the Iron Golem, and with its defeat gains the entrance into the forsaken city.

Once in Anor Londo, the player makes their way into the Anor Londo cathedral, where they face Dragonslayer Ornstein, of the Four Knights of Gwyn, and Executioner Smough. The Chosen Undead triumphs over them and gains access into the chamber of Gwynevere, where they are greeted by the Princess and awarded the Lordvessel. When Frampt sees that the player had completed their quest, he declares the prophecy set in motion and that the character is indeed the incarnation of the Chosen Undead.

The player is given the choice to put the Lordvessel on the Firelink Altar and proceed along Frampt's designs. In this instance, Frampt prompts that the Chosen Undead is the hero destined to succeed Lord Gwyn and extend the Age of Fire, continuing the curse of the undead. The player is also given the choice to place the Lordvessel for another ancient serpent named Darkstalker Kaathe, an agent of the Darkwraiths. Following this path will bring about the eradication of the old gods, and usher in the Age of Dark.

To gain access to Gwyn, Lord of Cinder, the Chosen Undead must satiate the Lordvessel. There are several beings who possess souls powerful enough to do so: Gravelord Nito, the Witch of Izalith, Seath the Scaleless and the Four Kings of New Londo.

In order to defeat the Four Kings, the Chosen Undead needs to acquire the Covenant of Artorias, a ring that is kept by the Great Grey Wolf Sif. The ring allows one to traverse the dark void called the Abyss. Upon arriving in the ruins of New Londo, the Chosen Undead, with the help of Ingward, drains the flooded city, earning passage to the Darkwraiths and their masters. If the player has not yet placed the Lordvessel before defeating the Four Kings, Darkstalker Kaathe will appear in the abyss.

Lastly, the Chosen Undead advances into the deepest part of Lordran: Lost Izalith. If the player speaks to Quelana in Blighttown it will be discovered that her mother tried to use her power to replicate the First Flame, but failed and was engulfed within it; eventually succeeding but at the cost of their former forms. This killed some of her daughters in the process and turned others into deformed creatures, and only Quelana and a Daughter of Chaos maintained the entirety of their human forms. Within the city, the Chosen Undead comes upon the Bed of Chaos, the source of all the demons that wander Lordran, and overcomes it.

After offering the necessary Lord Souls, the doors to the Kiln of the First Flame are opened to the Chosen Undead. Gwyn, now reduced to a Lord of Cinder, breathes his last breath in the final confrontation with the Chosen Undead. It is here that the Chosen Undead may make their decision of either linking the flame or walking away from it. Depending on which course of action is taken, one of the two possible endings will be unlocked. Whether the player has aligned themselves with Kaathe or Frampt will not affect the ending of the game.

Artorias of the Abyss[edit | edit source]

In the Artorias of the Abyss DLC the Chosen Undead travels back in time to the ancient realm of Oolacile, where they discover the truth about the death of the Knight Artorias and the fall of Oolacile. The quest presented in this DLC is completely optional and therefore, it is not required to complete the game.

After being dragged back in time, the Chosen Undead wakes up inside a cave beneath some trees. Outside, they are confronted by the Sanctuary Guardian. After slaying the beast, the Chosen Undead finds some sort of garden temple where they encounter a giant, talking mushroom named Elizabeth, who informs the player that the realm of Oolacile is being consumed by the darkness of the Abyss, She also tells the player that Princess Dusk has been kidnapped by a creature from the abyss and that Knight Artorias has ventured unto Oolacile to put an end to the spread. However, she assures the player that Artorias will be overwhelmed by the darkness.

The Chosen Undead then heads towards Oolacile Township in search of Artorias and Dusk. On their way to Oolacile, the player encounters Black Dragon Kalameet, an optional boss that can be fought later in the DLC. Elizabeth's words are proven to be true when, upon entering the Coliseum, the player is attacked by a corrupted Artorias. The Chosen Undead has no other option than finishing him off as he is unable to come back to his senses. After killing Artorias, the Chosen Undead can either give his soul to Lord's Blade Ciaran so that she can complete a proper burial or keep it for their own uses.

Finally, the Chosen Undead arrives at the Chasm of the Abyss where an illusion of Alvina guides the player to an illusory wall. Inside, the Chosen Undead discovers an injured Sif, protected by a magic barrier created by Artorias, in order to prevent Sif from being engulfed. Shortly after rescuing Sif the player faces Manus, Father of the Abyss, who is responsible for the spread of the dark. Manus is defeated, and Princess Dusk is saved. Upon returning to Oolacile Sanctuary, they are greeted by Elizabeth, who tells the Chosen Undead that she will let everyone know that Artorias was the one who defeated Manus, so that his honor may prevail. However, she assures them that their great deed will not be forgotten.

Promotional art of the Chosen Undead 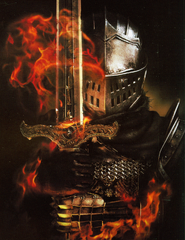 HD picture of the Chosen Undead 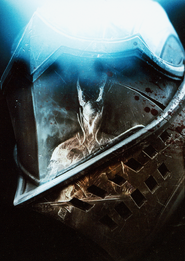 A close-up of the Chosen Undead 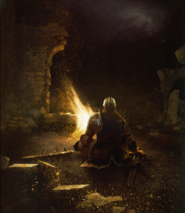 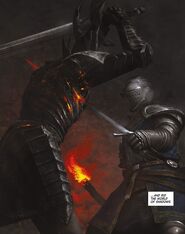 The chosen undead killing Silver Knight Arkon in Dark Souls: The Age of Fire.
Add a photo to this gallery

Retrieved from "https://darksouls.fandom.com/wiki/Chosen_Undead?oldid=331594"
Community content is available under CC-BY-SA unless otherwise noted.