Quelaag is a daughter of the Witch of Izalith and, along with most of her family, failed to escape from the chaotic flame and was corrupted by it. Due to exposure to the flame, Quelaag and her sister mutated into spider-like creatures with their upper body being fused to the monsters' backs.

She is the Fair Lady's older sister. When their mother, the Witch of Izalith along with their other two sisters became the Bed of Chaos, she fled with her sister. Although their sanity is intact, their lower bodies became bound with demon spiders. When her sister became weakened and blind, Quelaag remained in Blighttown to protect her from anyone or anything that would try to harm her.

A relatively easy way to beat this boss is to be human and summon Maneater Mildred, whose summon sign is right outside the Fog Door. Let Mildred distract Quelaag and stay away from her lava attack, as this is certain death. When away from her, pick off her health with ranged attacks, while Mildred tanks. This way Quelaag should be dead within a short period of time.

Another easy way to kill her is to get any halberd with a vertical light attack, such as the Great Scythe or Gargoyle's Halberd, and then repeatedly hitting Quelaag's human part. When aimed properly, she will stagger every time the attack connects, interupting whatever she's doing. This can be repeated to prevent her from attacking at all.

There is a spot between the stairs on the far side of the arena and the wall where Quelaag is unable to reach the player, at which point she can safely be killed from a distance using ranged attacks.

Found in Quelaag's Domain in between Blighttown and Demon Ruins.

Quelaag will charge up briefly and swing her sword from bottom-left to top-right (from her perspective). Roll to the left (player's perspective) to dodge this attack easily.

Quelaag will charge up for a longer time and stab with the sword, holding it out for a short duration. This attack homes in much more reliably than the slash and deals multiple hits.

Quelaag will lift four of her legs and slam them back down. This attack can be performed from the left or right side, or directly in front of her. It has a very long startup and is easily dodged.

Quelaag hugs her spider body and, after a roar, performs a deadly explosion. Quelaag will use this attack if the player gets very close to her body, such as beneath her legs.

Quelaag will emit fire jets from her spider body.

Quelaag had dialogue removed from the final game:

This indicates that Quelaag had a matriarchal status within the Chaos Servant covenant, along with or instead of her sister. 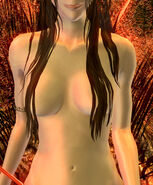 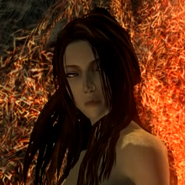