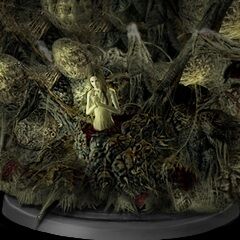 Chaos Servant is a covenant in Dark Souls. Chaos Servants dedicate themselves to the Fair Lady and provide her with humanity.

The player must not have killed Quelaag's Sister.

How to join[edit | edit source]

After defeating Chaos Witch Quelaag, reach the circular room beneath the Bell of Awakening where there are cobwebs lining eggs on the sides. The wall to the right is illusory. Inside, there will be an egg-infected man named Eingyi. The player must answer "Yes" to his question in order for him to move. If the player has answered "No", quitting and reloading will prompt Eingyi to pose his question again. The player may also kill him and join without repercussion. However, this will cost the player his services. Talking to Quelaag's Sister will give the option to join the covenant.

Attain the Great Chaos Fireball pyromancy upon joining. After reaching rank +2, players also attain the Chaos Storm (an upgraded version of Firestorm) as well as access to the shortcut to Lost Izalith (the shortcut can be found to the right, before the Demon Firesage boss in the Demon Ruins). The shortcut is one of two ways to save Solaire of Astora. Leveling up requires humanity.

Required offered humanity to level up:

Retrieved from "https://darksouls.fandom.com/wiki/Chaos_Servant?oldid=327135"
Community content is available under CC-BY-SA unless otherwise noted.