The Chaos Blade is a katana in Dark Souls II.

A katana of unknown origin. Damage to foes also damages its owner.

The peculiar pattern upon the blade suggests the sinister nature of this cursed blade. It is an alluring vortex, and a lonely soul.

The Chaos Blade can be obtained after trading the Old Witch Soul with Weaponsmith Ornifex for 10,000 souls. To obtain the soul, the player must defeat the Lost Sinner in NG+.

Much like its original counterpart, the Chaos Blade drains health from its wielder with every successful hit. However, it deals very high damage with each swing, making it a popular choice for PvP or against tougher enemies. The two-handed strong attacks, if they connect, can inflict devastating amounts of damage in the blink of an eye, especially if the weapon is buffed with either resins or spells.

The high damage, along with its ability to be infused and augmented, means that the Chaos Blade can be used for almost any build, providing the high Dexterity requirement and self-damage are not too off-putting.

The Chaos Blade has the highest counter strength of all available katanas, on par with the Lances. 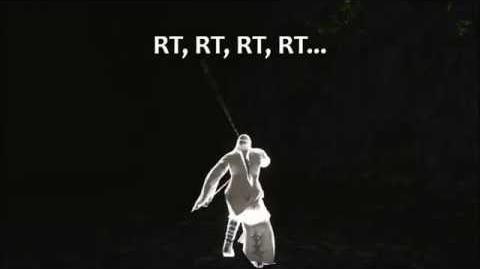