Centipede Demon is an optional boss in Dark Souls, located in the Demon Ruins.

The Centipede Demon is found in the Demon Ruins, specifically in the lower levels of the area.

The Centipede Demon wields no weapon and instead uses its heads to fight. Prior to awakening, the demon rests motionless on a rock face. When awakened, flames ignite out of the four spikes on its back and the multiple sets of eyes open aglow, then it drops down on two reptilian feet. The creature has a total of six demonic centipede heads: two on its back, two as arms, and the last two as the head and tail. The heads can extend, spit fireballs, and be cut off. The right "arm" is the biggest head and has the longest range. The left one is used to grab opponents and put them in its toothed chest. Its powerful legs let it jump tremendously high.

Ceaseless Discharge, the only son of the Witch of Izalith, was given the Orange Charred Ring by his sisters in an effort to presumably lessen the pain of his lava sores. However, he mistakenly dropped it due to his clumsiness.[1] The Centipede Demon[2] consequently emerged from the very spot it landed,[1] likely after the creation of the Flame of Chaos by Ceaseless' own mother.[3][4]

The Chosen Undead encountered the Centipede Demon in the Demon Ruins and slayed the monstrosity in battle, acquiring the Orange Charred Ring in the process.[2] The Ashen One later came across the corpse of the Centipede Demon, as they journeyed through the Smouldering Lake on their quest.[5]

At long range, the Centipede Demon throws its right arm at the player, dealing substantial damage if it connects. The Centipede Demon will only track the player until halfway through its charging animation. Otherwise, it is easily side-dodged if timed properly.

This medium-range attack can be avoided with a precisely timed roll. Players will see the Centipede Demon jump whilst spinning in preparation for a ground smash using one of its heads.

The Centipede Demon will swipe at the ground with its hand. This can be avoided by rolling under it or running away.

A swipe with its left arm. If it connects, grabs the player and devours them with its fiery belly. This attack is highly damaging, possibly fatal, so stay behind the Centipede Demon as often as possible.

An attentive player may either avoid or take minimal damage by rapidly mashing the left and right-hand light attack buttons immediately as the player is grabbed, breaking free of the demon's grasp.

The Centipede Demon leaps into the air and brings its vast weight down nearly exactly where it jumped from. Extremely damaging, yet simple to avoid — move away when it jumps. The Centipede Demon tends to roar after this attack, leaving it vulnerable.

If the player consistently stays near its Achillies tendon or back, the Centipede Demon will stomp its feet one foot to the other foot to take moderate damage for the player.

When the Centipede Demon's health is low, it will often leap into the air and throw a giant fireball at the ground. It deals high fire damage and has a wide area of effect.

Wildly swings its arm and tail in a circle around itself.

Throws two fireballs from its back. Only performed when player is at extreme range.

Chopping off the Centipede Demon's tail or arm will have the severed appendage crawl and bite at the player. While not especially threatening, it can prove a fatal distraction if not dispatched quickly. Up to five heads can chase after the player.

The Centipede Demon as it appears in Dark Souls III 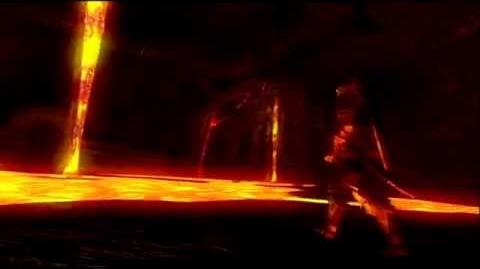