"Below us lies the ruins of the legendary city of Izalith. There, the Molten Giant watches over the Flame of Chaos. Our Fair Lady, and Mistress Quelaag, fled from the ruins. I do not know the details...And I do not ask..."
— Eingyi

Ceaseless Discharge, also known as the Molten Giant, is a boss in Dark Souls, located in the Demon Ruins. He is the only son of the Witch of Izalith, one of the four original Lords and creator of the Flame of Chaos.

Ceaseless Discharge is found in the Demon Ruins. He stands on a field of lava below a rocky cliff, keeping vigil in front of the corpse of one of his sisters. She is laid to rest on an altar, alongside the Gold-Hemmed Black Set. The path leading into the boss arena crosses over a large pit before leading to the cliff overlooking the lava field.

Ceaseless Discharge is an imposing creature of monstrous size. He wields no weapons, and instead uses his fiery tendrils to fight. His deformed face retains a look of pain, as the sores attained at birth swell with lava. From his head sprout two horns and seven glowing, red eyes that are partially covered by his wrinkled skin. Meanwhile, the right side of his body is framed by a "rib cage" made of insect-like appendages. Ten more tendrils appear on his back and his left arm coils around his chest, fused to his body. His body is the source of the lava that floods the lower levels of the Demon Ruins, making the area impassable.

Ceaseless Discharge can be found on the far end of his arena, watching over the corpse of his sister, and must be engaged in battle. Once he is defeated, the lower parts of the area will drain of lava, allowing the Chosen Undead to explore the remainder of the Demon Ruins.

Ceaseless Discharge[1] was born as the youngest child and only son of the Witch of Izalith.[2] However, his existence was not without hardship as he was born with sores inflamed by lava. His sisters gave him the Orange Charred Ring to ease his pain. Unfortunately, Ceaseless Discharge dropped the ring due to carelessness, which resulted in the birth of the terrible Centipede Demon at the spot where it fell.[3] When the Witch of Izalith attempted to duplicate the First Flame using a Lord Soul, the Flame of Chaos was created instead.[4] Ceaseless Discharge was transformed into a gigantic beast of terrifying size by the unstable flame, and was thereby regarded as the first demon.[2] Many of his sisters suffered similarly horrible fates and his mother was warped into the Bed of Chaos, the source of all subsequent demons that were created after their family.[5] Ceaseless Discharge came to inhabit the Demon Ruins and watched over the corpse of one of his sisters, who was laid to rest alongside her Gold-Hemmed Black Set.[1] His only source of comfort was the belief that those sisters that still resided in the fallen city of Lost Izalith watched over him.[2]

Eingyi refers to Ceaseless Discharge as the Molten Giant in dialogue, when spoken to by an egg-burdened Chosen Undead.

Ceaseless Discharge will attack the player using a combination of his tendrils and flame projectiles, as well as his left arm should he have access to it. His attacks are primarily physical-focused, though if the player is out of range he can cast a highly-damaging plume of flame instead. Because he stands in the lava field below the cliff, it is impossible to directly attack Ceaseless Discharge with melee weapons unless he swings at the player first. As he is immune to Fire damage, Firebombs cannot hurt him, and the player must instead rely on Bows or non-Pyromancy spells in order to damage him. Dodging his physical attacks and then counter-attacking by hitting his arm or tendrils also allows players without access to ranged combat to damage Ceaseless Discharge.

Should the player have enraged Ceaseless Discharge and caused him to rip his arm out of his torso, it is possible to defeat him with only a few attacks. By retreating back to the fog door and crossing over the large pit at the start of the arena, the player puts themselves out of reach of Ceaseless Discharge's physical attacks. In a move of desperation, Ceaseless Discharge will attempt to jump over the pit, but fall short and grab onto the bridge that the player is on. In this state, he is incapable of attacking and is fully at the player's mercy. Attacking his arm at this point will cause him to lose his grip and fall into the pit, ending the battle. However, if Ceaseless Discharge's left arm is still fused to his torso, he will instead perform ranged fire attacks to damage the player, which are very difficult to dodge on the narrow bridge path.

The slam's area of damage is actually much larger than the tendril itself: It creates a very wide shock wave that will damage the player even if there is no contact with said tendril. Players should stay clear away from the point of impact, and attempt a dodge even if it seems unnecessary.

This attack requires the player to have uninterrupted focus in order to dodge.

Uses the appendages on his back to hit the ground in front of him.

This attack is triggered when the player cannot be reached by his other attacks. A wide gust of fire is blasted from a short limb slammed on the ground. The attack can not be blocked and has tremendous range. Can only be avoided if the player stays close to the point of impact where the damage cone is narrow.

This attack is discernible from other slam attacks by Ceaseless Discharge lighting the tip of his tendrils on fire.

This move actually consists of two attacks, the second one will follow up shortly after the first. Dodging this requires correct timing.

If the player retreats back to the fog door Ceaseless Discharge will make a desperate leap over the cliff to try and crush them. Once he lands he will dangle helplessly above the cliff and will no longer be able to move or attack, becoming completely defenseless. 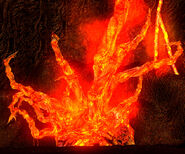 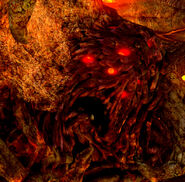 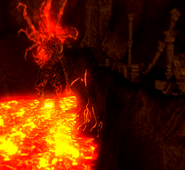 Hanging on the cliff 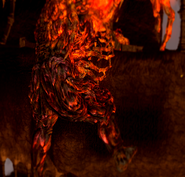 Hanging on the cliff 2

Hanging on the cliff 3 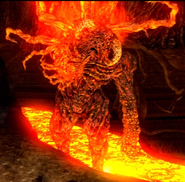 Ceaseless Discharge after releasing his arm