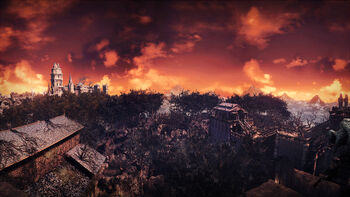 The Cathedral of the Deep is a location in Dark Souls III.

The Cathedral of the Deep is the original resting place of Aldrich, Devourer of Gods. His followers, the Deacons, are devoted to sealing away the horrors of The Deep, and the Cathedral owes its existence to this goal. Evangelists were sent to the Undead Settlement from here to spread their message to its inhabitants, and to retrieve Undead as sacrifices.

The Cathedral is surrounded by an immense graveyard where Reanimated Corpses and Infested Corpses rise continuously from their graves. The Grave Wardens are tasked with keeping them under control. The graveyard leads to the Cathedral's front gate, but it is closed. An adjacent path leads across the rooftops, through which you can reach a side entrance. An elevator back to the Cleansing Chapel is close by.

Inside the Cathedral's enormous main hall are two Giant Slaves, each sitting amid a pool of sludge that hinders movement. One is surrounded by numerous pieces of Writhing Rotten Flesh, which can greatly impede you while trying to fight the giant. It guards a stairway to a raised plateau with an altar to Aldrich, with several enemies apparently worshiping here. Beyond the altar is the room containing Aldrich's coffin, guarded by the Deacons of the Deep. For this battle, you may have the choice to summon a variety of friendly phantoms.

From the plateau, there is an elevator leading to the main gate and a stairway to the second level. This can provide access to Rosaria's Bed Chamber via a moveable bridge. However, another path, leading over the Cathedral's higher balconies and over the rafters, can be accessed by taking a lift close to the Cleansing Chapel. This lift can be reached through a path on the left side of the main hall.

In front of Rosaria's Bed Chamber are numerous Man-grubs which will attack you, but one of them will remain passive. Killing it yields the Red Sign Soapstone. Inside the chamber you will find Rosaria, Mother of Rebirth, and possibly Ringfinger Leonhard depending on your actions. 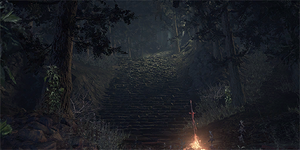 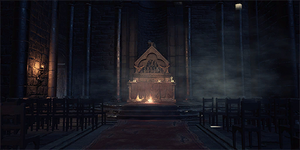 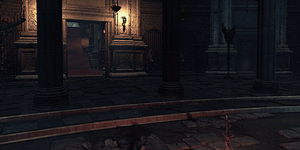 Deacons of the Deep 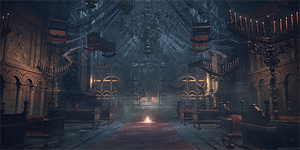 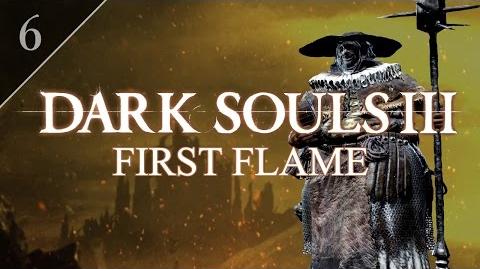 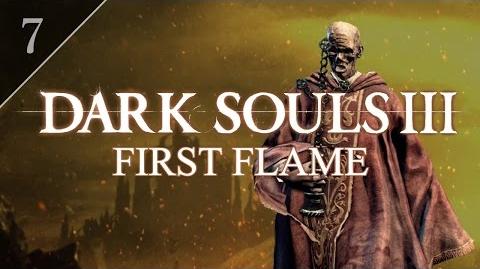 Dark Souls III First Flame (7) - Cathedral of the Deep & Deacons
Add a photo to this gallery
Retrieved from "https://darksouls.fandom.com/wiki/Cathedral_of_the_Deep?oldid=329542"
Community content is available under CC-BY-SA unless otherwise noted.