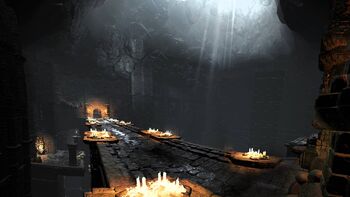 The Catacombs of Carthus is a location in Dark Souls III.

The Catacombs of Carthus are the resting place of High Lord Wolnir as well as the warriors of Carthus. As such, it is filled with Skeletons of various types and other underground-dwelling unpleasantries.

The entrance hall overlooks a deep chasm that is spanned by a bridge and a stairway. Most of the chambers are accessed by crossing the bridge and navigating to the stairway on the other side, but a shortcut can be taken by dropping down on the right of the entrance.

The Catacombs are sprawling and maze-like, and hide many hazards such as arrow traps activated by pressure plates, animated rolling boulders, and jars filled with harmful pursuing spirits. Successfully navigating these challenges will let you reach the lower caverns, natural formations that are distinct from the constructed chambers.

In these caverns, a strained, rickety rope bridge spans the gap between the catacombs and High Lord Wolnir's tomb. While safe to walk on, this bridge will snap and fall apart if any part of it is struck, and anyone on it will risk falling into the deep pit below if they do not manage to cross promptly. This makes combat on the bridge highly risky.

In the tomb, Wolnir is initially nowhere to be found. Only a skull goblet on a stone table can be found. Touching the goblet will cause the Abyss to start pouring out of it to the point of engulfing the entire room. Wolnir, who fell into the Abyss, will then appear. Once he is defeated, the Abyss recedes and the door to Irithyll of the Boreal Valley will open.

Returning to the bridge on the side of Wolnir's tomb allows access to the lowest chambers of the catacombs, by breaking the bridge and using it to climb down. A Demon awaits here, and beyond it lies the entrance to the Smouldering Lake. 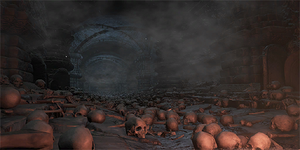 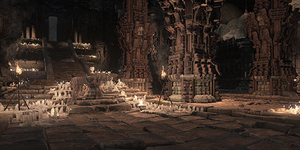 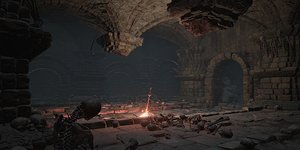 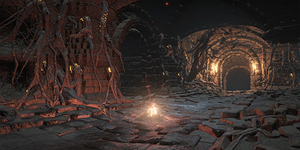 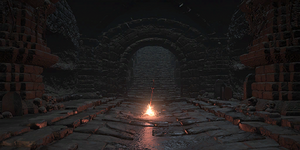 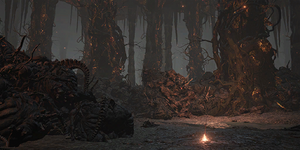 Type of pot which releases Affinity-like projectiles when destroyed.
Add a photo to this gallery
Retrieved from "https://darksouls.fandom.com/wiki/Catacombs_of_Carthus?oldid=318225"
Community content is available under CC-BY-SA unless otherwise noted.