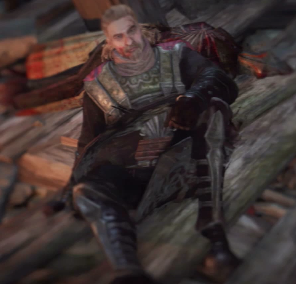 "My blade may break, my arrows fall wide, but my will shall never be broken."
— Captain Drummond

Captain Drummond is a character in Dark Souls II. He is voiced by Andy Beckwith.

Captain Drummond is a high-ranking official in Drangleic's Royal Army. He has long, laid-back, blonde hair and a goatee. Drummond wears the Drangleic set (without the helm) and wields the Drangleic Sword and the Drangleic Shield. His face is covered in blood and scars as a result of the battle against the Giants.

Regarding his personality, Drummond was known for being an honorable knight and faithfully loyal servant to King Vendrick. When he was ordered to protect the fort from the upcoming assault by the Giants, Drummond obeyed without hesitation. However, after the vast majority of soldiers under his command perished in the ensuing battle against the Giants, Drummond started to question Vendrick's actions and he asked himself if this war was really necessary.

For many generations, Drummond's ancestors have been in charge of protecting the Cardinal Tower and Drummond himself followed their steps. After Vendrick stole a prized possession from the Giants, the latter crossed the sea and started a war against Drangleic's forces in order to retrieve what was stolen from them.

Drummond was assigned with the protection of the Cardinal Tower, a military fort located on the edge of the kingdom. Although Drummond and his forces fought valiantly against their foes, they were no match for the Giants and Drangleic's soldiers were slaughtered.

After the massacre, Drummond became one of the very few survivors. Drummond failed his mission and the fort was taken over by the Giants. However, when all hope was lost, he was visited by a mysterious hero.

Drummond can be found in the Memory of Vammar. In order to gain entrance to the memory, one must talk to the Ancient Dragon back in the Dragon Shrine, who will give the player the Ashen Mist Heart. With the Heart in their possession, the player must go to the Forest of Fallen Giants and interact with the Tree of Giants located close to where Pate was found for the first time.

The player will meet an exhausted Drummond early in the Memory; he is in the first large room, lying down to the right of the door. If the player talks to him, he will explain the events which led to the war against the Giants. He will also command the player to slay the Giant Lord. After exhausting his dialogue, he will be available for summoning for the fight against the Giant Lord in the Memory of Jeigh. His summon sign is located next to the fog gate.

If the player speaks with Drummond, he will order his men to stand down and allow them to pass. The soldiers encountered in the memories from this point forward will not be hostile to the player and will assist them in fighting the Giants. However, if the player attacks a soldier, even accidentally, they will all turn hostile again and will remain hostile for the rest of the playthrough, even if the player speaks to Drummond again.

After defeating the Giant Lord, he will give the player the Drangleic Helm, which allows the player to obtain the "Holder of the Fort" achievement/trophy. The rest of his equipment is found in the Forest of Fallen Giants after the Pursuer's arena, in a corpse. This implies that Drummond finally met his demise at the hands of the Giants.

Artwork
Add a photo to this gallery
Retrieved from "https://darksouls.fandom.com/wiki/Captain_Drummond?oldid=328595"
Community content is available under CC-BY-SA unless otherwise noted.