Capra Demons, also known as goat demons, are enemies in Dark Souls. One is first encountered as an optional boss in the Undead Burg and weaker variants later appear in the Demon Ruins as regular enemies.

A Capra Demon is first encountered in the Undead Burg as an optional boss that the player can defeat. It is located in the lower section of the Burg. Later, however, additional weaker Capra Demons can be found in the Demon Ruins as regular enemies.

Capra Demons wield two Demon Great Machetes, hooked Ultra Greatswords that are made from cast iron. The demons themselves are large humanoids with four red-glowing eyes and a horned skull for a head. They each possess a bone tail, and have exposed shoulder blades and spines. They also wear a ragged skirt made of straw.

Capra Demons[1] were demons that were most likely created when the Witch of Izalith attempted to duplicate the First Flame using a Lord Soul. The attempt was unsuccessful and accidentally created the Bed of Chaos, the mother and source of all demons.[2] Capra Demons were classed as lesser demons.[3] One eventually inhabited the lower section of the Undead Burg, a fortified town that devolved into ruin. Meanwhile, others came to house the area known as the Demon Ruins, the gateway to Lost Izalith.[1]

The boss version of the Capra Demon battles the player in a small, confined room which makes it harder to recuperate health and stamina. It is best for the player to eliminate the two Attack Dogs as quickly as possible as they may stun-lock low Poise players and can also trap players in a corner. Climbing the staircase will enable the player to attack the boss with ranged weapons and give them an opportunity to recover; however, the boss can still reach the player. Players can climb the set of stairs and walk onto the protruding archway over the door at the far end of the room to recover safely. The Capra Demon will climb the stairs after you, but will be blocked by the low railing and miss its swings as long as the player is standing on the far end of the arch. Should the player have sorceries or pyromancy available to them, they can remain on the archway and batter the Capra Demon from out of its range, moving to the very corner of the archway to avoid being hit by its leap attack after it climbs the stairs. The Capra Demon has a long recovery time every time it lands after jumping, so if one lures it up the stairs and baits it into jumping off, the player can use that opportunity to deal decent amounts of damage. The Capra Demon is weak to fire, so Charcoal Pine Resins and Firebombs can be effective.

Wearing armor with high physical protection and poise will prove very useful against Capra Demon as all of its damage is physical. Weapons with high damage that aren't slow are also useful, as the fight revolves around mobility. If the weapon also has high Poise damage, this will help in stunning the Capra Demon out of attacks. High stability shields will be helpful in blocking a majority of its attacks.

An easy way to defeat the Capra Demon consists in equipping the Ring of Fog before traversing the fog gate, this way the Attack Dogs will ignore the player completely and the boss can be fought without intrusions, as long as the battle is kept near the archway.

The Lesser Capra Demons fought in the Demon Ruins are much more simple to handle as the player has more room to maneuver. Players may lure them over with ranged weapons as fighting two at once may be challenging.

The Capra Demon swings with either of its swords. It can be avoided by rolling.

Very similar to the Single Swing, however, the Capra Demon swings with one sword after the other in a two-hit combo. Deals heavy damage, or heavy stamina drain if the player is hit while blocking.

Used when the player is far away from the Demon. It jumps towards the target, then smashes its two swords into the ground upon landing. This attack can be blocked with a strong shield or it can be dodged by rolling away.

A quick strike from its left side causes heavy stamina drain when blocked, but can be dodged by rolling towards the Demon.

It holds its two blades together and pulls them back to slash into the ground. This attacks does heavy stamina damage when blocked, and is easily dodged.

The Capra Demon's strongest attack. It raises its swords above its head, then brings them down in a vertical smash. It cannot be blocked, and deals heavy damage to the player. However, it has an obvious animation and a long wind-up time, so it is easy to dodge.

Capra Demon charges with his huge blades in hand. 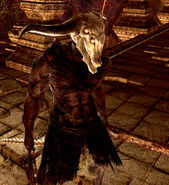 Capra Demon in the Demon Ruins. 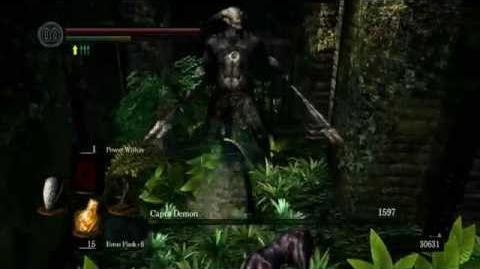