The Caestus is a gauntlet in Dark Souls.

The Caestus has a short reach, but quickly cools down. Amount of damage inflicted is dependent on its wearer's strength.

Caestuses are sold by Andre of Astora for 200 souls.

The caestus deals very low damage and has a short reach, in exchange for a relatively fast attack speed.

Although it deals less damage than the Claw, it can be obtained much earlier.

Due to its size, wearing concealing clothing or using certain effects can 'mask' the fact the player is wielding the Caestus. With a Ring of Fog in PvP, the player would look like they are bare-handed and friendly until they get a backstab or riposte. In PvE, the Caestus does deal enough damage to give the player a chance of survival against weak or humanoid enemies like Hollows, but against tougher enemies a better weapon would be required. 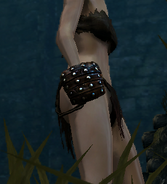 Add a photo to this gallery
Retrieved from "https://darksouls.fandom.com/wiki/Caestus?oldid=285931"
Community content is available under CC-BY-SA unless otherwise noted.