The Outrider Knights from Boreal Valley were given the eyes of Pontiff which transformed them into savage, raving warriors who only knew how to serve as mindless guards. Every Outrider Knight one day devolves into a beast, constantly hounded by Pontiff Sulyvahn's black eyes.

Former warriors of Irithyll of the Boreal Valley, these knights were bestowed rings by Pontiff Sulyvahn that drove them into a violent frenzy through inducing visions of endless combat. They eventually lost their sanity and became mindless warriors.

Outrider Knights are considered minibosses that guard secret areas and do not respawn on defeat. Their fighting style is similar to Vordt of the Boreal Valley.

Outrider Knights are usually initially unaware of the player, so use this opportunity to start the fight with a powerful attack. Once provoked, it is possible to wear them down with ranged weapons from a distance; however, they can close the gap very quickly so caution is advised. Unless the player has plenty of poise, it is recommended to evade their attacks rather than block them, as they rapidly drain stamina.

All of their attacks inflict Frost damage and can cause frostbite, which can be lethal if the player is unable to escape. They are very agile opponents and will often sidestep attacks, so a quick-use weapon is recommended.

When they are far away from the player, they are very susceptible to ranged attacks and will just continue approaching very slowly without attacking. Headshots are especially effective and will stagger them heavily.

The one encountered in the Undead Settlement can be killed quite easily. Once reaching the bottommost area via an elevator, the player needs to send it back up to leave open a hole in the ground. They may then lure the Outrider Knight near it and run around it until he falls to his doom. The player will automatically receive the Irithyll Straight Sword upon his demise. An alternative strategy is to pass through the door leading to the Road of Sacrifices and killing it with ranged attacks from a safe spot.

They are able to be parried and riposted, however, this can be tricky because they attack with such great speed. 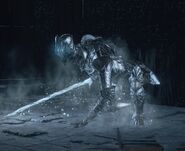