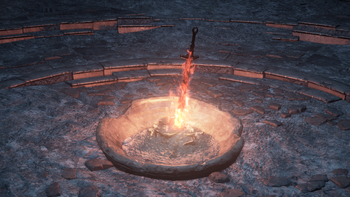 For other uses, see Bonfire (disambiguation).

Bonfires are a gameplay mechanic in Dark Souls III.

When a bonfire is interacted with, the Ashen One will sit and rest at its edge. Doing so will refill the player's HP and FP to its maximum and both the Estus and Ashen Estus Flasks uses, as well as canceling any negative status effects suffered by the player, both procced effects and any buildup.

Utilizing a bonfire will also reset all respawning enemies in the area. A bonfire cannot be used while being actively pursued by one, or while an invader or phantom is in the world.

The player can also warp between any bonfire they have lit. When a player dies, they will be revived at the last bonfire they rested at, or at the one most recently lit, making bonfires act as checkpoints in the world.

There are a total of 77 bonfires in Dark Souls III, of which 8 are added by Ashes of Ariandel and 12 by The Ringed City.

Cathedral of the Deep[]

Irithyll of the Boreal Valley[]

Kiln of the First Flame[]