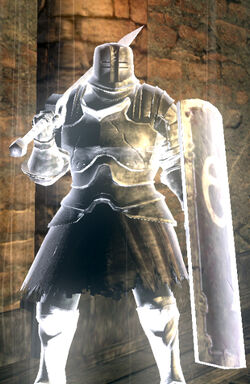 Black Iron Tarkus, (黒鉄のタルカス Kurogane no Tarukasu) also referred to as Iron Tarkus, is a phantom in Dark Souls. He can be summoned by the player in the fight against the Iron Golem boss in Sen's Fortress.

In a tower structure at the end of the walkway to the right from where the fog door to the Iron Golem is located. Like other summon signs, Tarkus's summon sign is only visible if the player has not put down a summon sign and is in human form. He aids the player in taking on the Iron Golem as a white phantom. He is notoriously tough and can serve as a distraction during the battle. In fact, Tarkus can defeat the boss all by himself in the first playthrough and stands a break-even chance of doing so on future play throughs with minimal support from the player. A Black Iron Set is found on his corpse in Anor Londo, next to the entrance to the Painted World of Ariamis. A Painting Guardian stands next to his corpse, possibly removing it from the room since the body is so far away from the entrance.

Black Iron Tarkus is most likely a knight of Berenike,[1] and is renowned even among his fellow knights for his great strength.[2] This makes him one of the longest surviving knights to attempt at curing undeath and fulfilling the prophecy. He defeated the Iron Golem and, as the only one to prevail, carved his summon sign so others who would eventually come as far as him would be assisted by his phantom.

According to the Crestfallen Merchant, Black Iron Tarkus met his doom while attempting to visit Anor Londo.[3] This proves true, as his body can be found in the hall of the Painting Guardians.

Black Iron Tarkus without his helm

Black Iron Tarkus standing next to the Chosen Undead