Start a Wiki
watch 06:24
'Dark Souls' Lore: Black Dragon Kalameet
Do you like this video?

"If thou seeketh to explore this domain, be wary of a black dragon. I fear thee no match for this terrible beast."
— Hawkeye Gough

Black Dragon Kalameet is a boss in Dark Souls: Artorias of the Abyss.

The player first encounters Kalameet on the second stone bridge in Royal Wood.

Kalameet can be confronted opposite the Colosseum where Knight Artorias is fought. Beyond some Abyss Attack Dogs lies a ladder running parallel to a waterfall. Shortly after moving into the clearing, Kalameet will fly through the canyon and breathe black fire at the Chosen Undead. After this attack, speaking to Hawkeye Gough will convince him to shoot down Kalameet, so players can properly engage in battle on the ground. It is not necessary to be struck by the attack in order to receive Gough's help, only that Kalameet performs it.

It is possible to kill Kalameet without Gough's help. However, doing so will take an inordinately long time and a very large amount of arrows and the player will not receive any souls as a reward.

After Gough shoots Kalameet down, the Royal Wood (including the arena where players fought Knight Artorias) becomes Kalameet's summoning area. While white phantoms become available for summoning (usually at the beginning of the Royal Wood, near Oolacile Sanctuary), it means that red phantoms may invade again also.

Black Dragon Kalameet is the last of the ancient dragons[1] and bringer of calamity.[2] Even Anor Londo feared to provoke his wrath.[3]

Following Kalameet's death, the Dragon Knights, an elusive faction of warriors, used the deceased dragons scales to forge special weapons and armor for some of their knights. [4]

Severing Kalameet's tail and obtaining the Obsidian Greatsword can often prove more challenging than the battle itself, as the dragon's tail is mostly out of reach throughout the fight. His tail has 540 health on Ng and 847 health on NG+.

Used only if the player attempts to enter the gorge before having Hawkeye Gough shoot down Kalameet. Kalameet flies overhead and bathes the entire area in flame then flies away. He will continue to use this attack as long as the player stays in the gorge.

Triggered when at long range, Black Dragon Kalameet will direct his flames toward the player. This does not track, so it can be easily avoided. Being caught in the flame will often result in a stun-lock, fatal outcome. Blocking will result in a guard break unless the player has a strong shield and high stamina. Kalameet may stunlock the player and use this attack between 1-3 times in a row which will result in a quick death.

When the player is in medium range of Black Dragon Kalameet, he will breath a surge of his flame, sweeping it from his left to his right. This is a good opportunity to rush and strike him where he is open, but blocking is also possible.

When the player is under Kalameet's head, he will stand on his back legs and breath fire in a large area right in front of him. A safe spot is to rush under his head or between his legs.

Triggered when the player is very close and is one of Black Dragon Kalameet's most devastating attacks. He will fly upwards into the air and hover, before breathing fire directly below him. The flame spreads in a circular pattern from the impact point and deals an extreme amount of damage. Running away is recommended, although blocking is also possible with greatshields. Shields will take two hits in close proximity and a single hit further away.

This can be particularly frustrating, due to the lock-on breaking right at the edge of the danger zone. This causes players trying to run away to turn back into the line-of-fire, or blocking players to turn their backs to the flames. The best way to prevent the lock-on from breaking is to back away from Kalameet as soon as possible. Blocking players may choose to simply stand their ground to avoid breaking the lock. This can also be avoided by simply unlocking and running, or continually rolling away when Kalameet shows signs of the attack.

If a wall is behind the player, it will stop Black Dragon Kalameet's progress, leaving him in the player's near vicinity. This is extremely unsafe, as it will put the player in a position where escaping the flame is not possible.

When the player is near, Kalameet will swing with his head from his right side to his left, using his snout as a spear. He may afterwards follow up with a swing in the reverse direction. This can be blocked, however. Due to Kalameet's long neck, the second swing has a tendency to strike the player in the back if they are too close.

His right flank is safe during this and leaves him open for attack.

When the player is too close to Kalameet's anterior underside, he will stomp his feet. These stomps don't reach out to the player, so just not being directly under Black Dragon Kalameet is enough to avoid this attack.

Black Dragon Kalameet will attempt to crush players with his tail if they remain underneath or behind him long enough. Kalameet's tail will remain on the ground for several seconds, providing one of the best opportunities to cut his tail off.

Similar to the Head Strike, but without the follow up and covers a greater distance; Black Dragon Kalameet will lunge forward, swiping the player with his head and claw. This attack can be surprising, as he throws it very fast and from a rather long distance. Blocking is possible, but will greatly push the player back.

Black Dragon Kalameet will speedily rotate in a full circle, swinging his tail at the player while jumping away. The actual tail sweep comes late, making difficult to time dodges correctly.

This is similar to Great Grey Wolf Sif's attack.

Kalameet is most likely to use Tail Smash or Tail Sweep after this attack.

Black Dragon Kalameet's signature move. He will rise on his hind legs while the crest on his head glows intensely and produces a high frequency noise. If captured the player will then levitate in front of Kalameet and receive some damage. Afterwards, the player will have the Mark of Calamity for about 60 seconds, during which they will receive twice as much damage. Players can avoid this by running away as soon as he begins to stand. 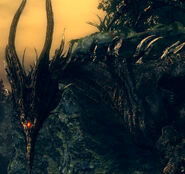 Kalameet is to be feared by all.

The Chosen Undead locked in combat with Kalameet.

Retrieved from "https://darksouls.fandom.com/wiki/Black_Dragon_Kalameet?oldid=329507"
Community content is available under CC-BY-SA unless otherwise noted.