Encountered in the Undead Parish Church as a miniboss, guarding the Fire Keeper Soul. Respawning versions can be found in Sen's Fortress and the Painted World of Ariamis.

Large and clad in the Steel Set, they wield either a large Mace or Greatsword, depending on the location where they are found, along with a Tower Shield.

The knights of Berenike were once seen as the mightiest of the mighty[1] and were renowned for their heavy equipment.[2]

Countless Knights of Berenike became Undead and ventured to Lordran. But their journey was for naught, as they went Hollow, and became a threat to all Undead.[1] 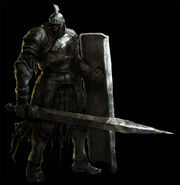 Concept Art
Add a photo to this gallery

Retrieved from "https://darksouls.fandom.com/wiki/Berenike_Knight?oldid=306879"
Community content is available under CC-BY-SA unless otherwise noted.