Start a Wiki
watch 02:02
'Dark Souls' Lore: Bed of Chaos
Do you like this video?

Bed of Chaos is a boss in Dark Souls, found in Lost Izalith. It is possible to reach this boss without fighting the Demon Firesage or the Centipede Demon. This is done by offering Quelaag's Sister 30 Humanity through the Chaos Servant covenant.

The Bed of Chaos, mother of demons, was a result of the Witch of Izalith's attempt at remaking the First Flame. She and some of her Daughters of Chaos were devoured, while the rest of the Witch's followers grew mutated demon forms.[1]

The Bed of Chaos will use this attack as the player nears the middle area. Its left hand will swipe across the floor and subsequently do the same with its right hand. This attack can be blocked, but consumes a large amount of stamina, making the second attack harder to block.

It will raise its hand up into the air and then slam it onto the ground. Players can avoid this attack by running away from the arm before it hits the floor.

After destroying one root, the enemy will gain an arm made of fire. The enemy attacks by hitting the floor and then digging in a straight line towards itself. You can avoid this attack by running or rolling to the side as it only travels in a straight line. It can be blocked, but a shield with high resistance to fire is recommended.

After destroying the second root, the enemy will gain a second arm made of fire. This attack will use both arms to attack, but can still be avoided in the same way.

The enemy can only use this attack after both roots are destroyed. It will begin to make flames appear in the area from which it then erupts, causing heavy fire damage. When the surroundings begin to flame up, one must remain in the areas where flames do not appear in order to safely avoid this attack.

The enemy uses this attack very rarely when one or both roots are destroyed. It will charge inward and then expand, sending multiple flaming projectiles both at the direction of player and around them.

Used if the player lingers at the mouth of the Tree Beast without going inside. The Fire Aspect crosses its arms and then swings them open after a distinctive shriek, engulfing the entire area in fire. Hits multiple times.

Closeup of the Tree Beast

Closeup of the Flame Aspect

A render of the Chaos Bug

Bed of Chaos standing pose before entering its room

The Bed of Chaos as it appears in Dark Souls: The Age of Fire.
Add a photo to this gallery 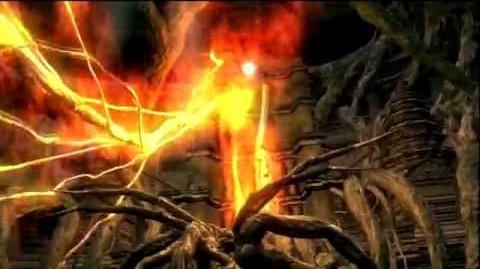 Retrieved from "https://darksouls.fandom.com/wiki/Bed_of_Chaos?oldid=327429"
Community content is available under CC-BY-SA unless otherwise noted.