The Basilisk is an enemy in Dark Souls.

Basilisks are found initially in the Depths, then again in The Great Hollow and Ash Lake.

Basilisks are slender, scrawny lizards with what appears to be incredibly bulbous eyes. Upon seeing the player, it will frantically scramble or leap into position and exhale a grey mist that will quickly overwhelm the player with the Curse status, causing immediate death. Despite everything, Basilisks are actually deaf: they will never hear a player coming from behind and they react slowest when approached in an enclosed space.

The bulbous appendages that appear on the basilisk are not its actual eyes. The basilisks eyes are the small yellow beads that appear right over its mouth.

The basilisk can only cause curse status; they cause no other effects or any direct damage in any form.

The basilisks in the Depths guard the Ring of the Evil Eye.

Hitting any part of a basilisk's face will deal increased damage. Because the face is the point that gets targeted when locking onto the basilisk, using thrust attacks will work exceedingly well against basilisks, as each strike will almost guarantee this bonus damage.

Basilisks have no melee attacks whatsoever.  Combined with relatively low health, they can be quickly dealt with. However getting too close risks exposure to Curse and is ill-advised if they are in any significant numbers, or the player has low Curse resistance.

Considering their only means of offense are their Curse attacks, the player could equip a shield with high Curse block in order to take basilisks down more easily. Spears and Thrusting Swords are excellent for this strategy, as they can strike from behind shields.

Basilisks stagger from just about any hit, and can easily be pelted with arrows without them being able to execute a single attack. This gives the added bonus of allowing players to pull one or two basilisks at a time, rather than have the entire swarm of seven or so rushing after them. 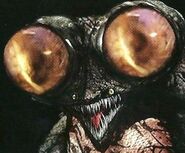 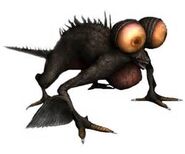