Start a Wiki
watch 01:03
'Dark Souls' Lore: Asylum Demon
Do you like this video?

The Asylum Demon is a boss in Dark Souls, located in the Northern Undead Asylum. It is the first boss in the game to be encountered by the player.

The Asylum Demon is found in the Northern Undead Asylum. It will attack the player in the exit room that lies immediately after the first bonfire, through the first set of large double-doors.

The Asylum Demon wields a Demon's Great Hammer, an intimidating weapon molded from stone archtrees. The demon has an almost draconic appearance, with spotted blue-green scales all over its body and a pair of stubby wings on its back. It sports a tail and horn-like growths portrude from its legs and arms. Dark red eyes are accompanied by a set of large teeth that are revealed by the demon's permanently exposed gums.

The Asylum Demon[1] was a demon who was most likely created when the Witch of Izalith attempted to duplicate the First Flame using a Lord Soul. The attempt was unsuccessful and accidentally created the Bed of Chaos, the mother and source of all demons.[2] The Asylum Demon was a lesser demon[3] and, after its creation, came to reside in the Northern Undead Asylum.[1] The prison was designed to keep Undead locked away from the rest of the world and was notably difficult to escape from.[4]

When the Chosen Undead attempted to escape the prison, they encountered the Asylum Demon who prevented them from leaving via the main hall's exit. They fled the demon's wrath but later returned and defeated it to acquire the Big Pilgrim's Key to escape.[1]

The first encounter with the Asylum Demon is optional and it is highly advised for first-time players to escape the room to avoid confrontation. However, if the player has obtained Black Firebombs as a starting gift, they can be used to defeat the demon relatively quickly, requiring just 5 of them (in NG). Killing the Asylum Demon within this first encounter will yield the Demon's Great Hammer. The same strategy used against the Vanguard from Demon's Souls can be used here. Simply cling to its back and move away when he floats upwards. It is recommended you use the Straight Sword Hilt as a shield as it can stop some damage and has lower DPS than the player's fist.

Should the player avoid the first encounter, they will have to endure the mandatory second encounter with the Asylum Demon. However, the player can gain a massive advantage by using a plunging attack from the ledge above the boss. This will typically deal 1/4 of its health bar, varying depending on which weapon is used. Take note that wielding one's weapon two-handed is recommended for the plunging attack, as it will increase the damage of the attack. Furthermore, players should not stand upon the platform for too long because the demon will eventually leap up and destroy the platform, potentially killing the player.

On New Game Plus, the Asylum Demon can be easily defeated in the first encounter as the player retains all of their equipment from their previous playthrough.

The attacks of the Asylum Demon are similar to, if not the same as, the Vanguard Demon's from Demon's Souls.

The Asylum Demon flies up, pauses, and then allows itself to fall, dealing massive damage if it hits. Very easy to dodge, as it is well telegraphed. Has a slight area of effect.

A horizontal swing of the Asylum Demon's hammer. Has poor tracking, and is easy to avoid.

Used when the player is side-stepping to its right. Can be dodged by rolling at the last second.

Used when the player is side-stepping to its left. Once again, rolling at the last second allows the player to dodge it.

A downward smash. Has a large range, but is fairly easy to avoid.

Used when the player is far away from the Demon. Before attacking, the Asylum Demon will flutter it's wings. Easy to dodge.

A combo of Hammer Swings. It has slightly better tracking than it's predecessor, and may be followed up with a Hammer Smash attack.

*Defeating the Asylum Demon before picking up the player's class weapon will grant a Demon's Great Hammer. The Big Pilgrim's Key the Asylum Demon would drop otherwise is given by Oscar in this case. 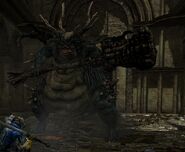 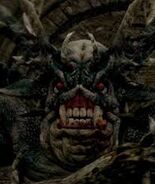 Close up of the Demon's face 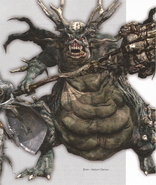 Fighting the Demon head on

Getting the upper hand

Retrieved from "https://darksouls.fandom.com/wiki/Asylum_Demon?oldid=328408"
Community content is available under CC-BY-SA unless otherwise noted.