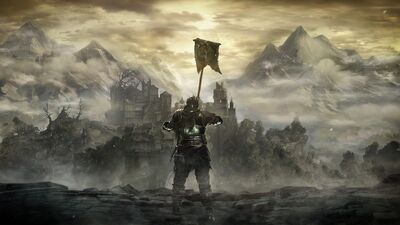 The Ashen One is the playable character and the protagonist of Dark Souls III.

The title of Ashen One is given to the player by the Fire Keeper of Firelink Shrine.

By the events of Dark Souls III, the Ashen One rose from their grave and started a journey to defeat all other Lords of Cinder and return them to their thrones, thus putting an end to the cycle of the First Flame and the curse of the undead once and for all.

At some point in time, the Ashen One had attempted to link the fire. They were not powerful enough and were instead burnt to ash by the flames. Some time later, the Ashen One was awakened by the toll of the bells, signifying that the link of the fire was threatened. The Ashen One emerged from their grave and set out to leave their tomb. Finding the Coiled Sword lodged inside Iudex Gundyr, the Ashen One pulls it out, awakening Gundyr and beginning a fight. Halfway through, Gundyr is seemingly consumed by the Pus of Man, but the Ashen One defeats him and finds Firelink Shrine.

Inside the shrine, they encounter the Fire Keeper, who tells the Ashen One that the Lords of Cinder; Aldrich, Saint of the Deep, Yhorm the Giant, the Abyss Watchers and Lothric, Younger Prince, have abandoned their thrones, and charges them with bringing the lords back. The Fire Keeper also offers to channel souls in order to increase the Ashen One's strength. Also in the shrine are Andre of Astora, a smith from the Age of Gods, the Shrine Handmaid who offers an expanding store of goods in exchange for souls. The shrine is also home to Hawkwood, a crestfallen warrior, Leonhard, a servant of the goddess Rosaria, Mother of Rebirth who urges the Ashen One to invade the worlds of others to take their embers, and finally Ludleth of Courland, the last remaining Lord of Cinder who offers the Ashen One sage advice and the art of soul transposition, provided the Ashen One can provide him with a Transposing Kiln.

The Ashen One places the Coiled Sword in the center of the shrine, creating a bonfire, and proceeds to travel to the High Wall of Lothric to begin their quest.

The Ashen One progresses through the High Wall of Lothric Castle, now home to mindless undead soldiers and a fire-breathing wyvern. Fighting their way to a church, they encounter the high priestess of Lothric Castle, Emma. Emma provides them with a banner that will allow them safe passage to the Undead Settlement, but warns them that their path is guarded by Vordt of the Boreal Valley. Also in the High Wall is Greirat of the Undead Settlement, a thief that will swear himself to the Ashen One if the Ashen One rescues him from his cell.

After finding and defeating Vordt, the Ashen One raises the banner on a ledge, and is given transport to the Undead Settlement, a dilapidated town inhabited by the undead.

Once arriving in the Undead Settlement, the Ashen One finds Yoel of Londor praying for death at a ledge. Upon encountering the Ashen One, Yoel offers his services, providing rudimentary sorceries and offering to draw out the Ashen One's "true strength", not telling them that doing so will burden the Ashen One with the Dark Sigil which will make them hollow upon death.

Inside the Settlement, the Ashen One is accosted by the inhabitants of the town and pelted with massive arrows by a Giant atop a tower. After fighting and killing the Curse-rotted Greatwood, the Ashen One will find a Transposing Kiln that will allow Ludleth to provide great spells and weapons from the souls of powerful creatures.

The Ashen One may also rescue Cornyx of the Great Swamp, a master of pyromancy that will share his arts with the Ashen One. Upon finding the church in the center of the settlement, the Ashen One encounters Eygon of Carim, a disdainful knight of Carim. If the Ashen One purchases a key from the handmaiden, they may free Eygon's ward, a blind nun by the name of Irina, who will offer to tell the Ashen One stories of miracles. After freeing her, Eygon will offer an alliance to the Ashen One, for as long as Irina's safety is guaranteed.

Inside the church, the Ashen One encounters Siegward of Catarina, a Catarina knight who is perplexed by a lift that will only take him down, rather than up where he wishes to speak to the Giant. If the Ashen One solves the riddle of the lift, they may make peace with the Giant, who will offer his help.

Once through the settlement, the Ashen One makes it to the Road of Sacrifices, where offerings were once transported to Aldrich, Saint of the Deep.

Following the road leads the Ashen One to the Crucifixion Woods, where they encounter Anri of Astora and their faithful follower Horace the Hushed. Anri seeks Aldrich, and thinks to find him in the Cathedral of the Deep. They offer their help to the Ashen One, should the Ashen One need it.

Making their way through the Crucifixion Woods leads the Ashen One to a crossroads. One path leads to Farron Keep, home of the Abyss Watchers, whereas the other one, guarded by one of the Crystal Sages leads to the Cathedral of the Deep, home of Aldrich. Here the Ashen One may also find Orbeck of Vinheim, a sorcerer who will offer to share his knowledge if the Ashen One brings him magic scrolls.

Cathedral of the Deep[edit | edit source]

After returning to Firelink Shrine, the Ashen One again encounters Anri and Horace, who tell the Ashen One that Aldrich supposedly hails from Irithyll and that he may have returned home. They will also find Sirris of the Sunless Realms, who shows little interest in the Ashen One, unless they provide the Handmaiden with a certain ash, prompting Sirris to offer the Ashen One their friendship. If the Ashen One chooses to allow Yoel of Londor to draw out their true strength a sufficient number of times, Yoel will eventually die, only to be replaced by Yuria of Londor, who attempts to sway the Ashen One into usurping the fire and becoming the Dark Lord of Hollows.

The Abyss Watchers, reduced to fighting amongst themselves, are defeated by the Ashen One, who claims their ashes in order to restore them to their throne in Firelink Shrine. Killing the Watchers opens the way to the Catacombs of Carthus, an underground tomb filled with skeletons.

Progressing through the trap-ridden Catacombs, the Ashen One eventually finds a drawbridge that will lead them to Irithyll of the Boreal Valley. If the Ashen One should choose to descend the fallen drawbridge, they may find the Smouldering Lake, ruled by the Old Demon King and home to various demons and a great slithering worm.

Across the bridge, the Ashen One finds a strange goblet that pulls them into the Abyss. Here they encounter High Lord Wolnir, who attacks the Ashen One. By destroying his enchanted bracelets, Wolnir will lose his grip and fall into the Abyss, allowing the Ashen One to return to the regular world, where the path to Irithyll, a frozen city guarded by an impenetrable barrier and ruled by Pontiff Sulyvahn in the name of Aldrich, is now open.

The Ashen One is able to penetrate the barrier to Irithyll with the magic doll they found in the Cathedral of the Deep. Progressing through the frozen city, the Ashen One will again come to a crossroads. They may either descend through the dungeons of Irithyll to find the Profaned Capital, or progress further into the city, finding the ancient city of the gods, Anor Londo.

Descending through the dungeon of Irithyll brings the Ashen One to the Profaned Capital, home of the reclusive Yhorm the Giant, one of the missing lords. Fighting their way past the gargoyles and priestesses that guard the way to the giant, the Ashen One finds him atop his throne. The enormously strong and durable Yhorm initially seems insurmountable, but the Ashen One finds the magic blade Storm Ruler, a sword with the ability to fell giants, beside his throne. Using the power of the blade, the Ashen One is able to bring Yhorm to his knees and kill him, collecting his ashes.

Returning to the surface, the Ashen One fights their way to the grand church in Irithyll where they find Pontiff Sulyvahn. Killing Sulyvahn opens the way to Anor Londo, fabled city of the gods, where Aldrich awaits. Aldrich, having lost interest in the flame and having instead turned towards the Dark, sought out Anor Londo to devour the gods themselves. He found and devoured Dark Sun Gwyndolin in Anor Londo, who sacrificed himself to save Company Captain Yorshka.

The Castle, home to various knights and soldiers of Lothric along with fire-breathing dragons, holds the final lord of cinder. By now, the very sun itself has become a Darksign, and Pilgrim Butterflies are seen flying towards the castle. Fighting their way through the castle, the Ashen One may choose to make a detour to the Consumed King's Garden, home to the king of Lothric, Oceiros, the Consumed King. The king, having gone mad long ago and deformed himself into a dragon-like being, ferociously attacks the Ashen One.

In Archdragon Peak, the Ashen One can face the Ancient Wyvern and The Nameless King, once known as Lord Gwyn's Firstborn, the old God of War who aligned himself with the Ancient Dragons.

Progressing through Lothric Castle will bring the Ashen One face to face with a Dragonslayer Armour controlled by the Pilgrim Butterfly. Defeating the armour opens the way to the Grand Archives, home to ancient knowledge.

The Ashen One fights their way through the Archives, and find themselves close to the location of Prince Lothric, who hides at the very top of the castle. Lothric has no intention of returning as a lord of cinder however, preferring to watch the world end from afar with his brother Lorian. The brothers attack the Ashen One, who slays them both, and claims Lothric's ashes.

The Painter informs the Ashen One that she has sent Gael to find the Dark Soul, which she will use for her next painting.

If the Ashen One follows Gael, they will find themselves in the Dreg Heap, an amalgamation of collapsed kingdoms and civilizations at the end of time. Within the Dreg Heap they may encounter Lapp, a hollow who seeks the Purging Monument in order to remember his past life. Fighting their way past the Dreg Heap they find two demons, the Demon in Pain & Demon Below who combine to form the Demon Prince. Defeating the Demon Prince allows the Ashen One to travel to the Ringed City (location), the first city of Man, inhabited by the Pygmy Lords. Gwyn, the first Lord of Cinder, gifted the city to humanity after the end of the Age of Ancients, along with his daughter Filianore.

After defeating Halflight, the path to Filianore is open. Filianore lies sleeping while clutching a broken egg-like ceramic. If the Ashen One touches the ceramic, it will shatter into pieces and Filianore will wake, upon which a blinding light emanates from the shards of the ceramic. The Ashen One suddenly finds that the Ringed City is now a lifeless desert, and Filianore an emaciated corpse. Leaving her room, the Ashen One comes upon a fleeing Pygmy. Investigating the scene closer, they find Gael consuming one the remains of a pygmy in order to gain their Dark Soul. He proceeds to attack the Ashen One in order to gain their piece of the Dark Soul.

Promotional screenshot depicting the Ashen One raising the Small Lothric Banner.
Add a photo to this gallery
Retrieved from "https://darksouls.fandom.com/wiki/Ashen_One?oldid=331801"
Community content is available under CC-BY-SA unless otherwise noted.