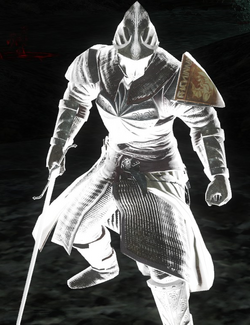 Ashen Knight Boyd is a character in Dark Souls II.

Ashen Knight Boyd is a white phantom available for summoning in the Brightstone Cove Tseldora area for The Duke's Dear Freja and the Looking Glass Knight in Drangleic Castle. He wears the Royal Soldier Set and is armed with an Estoc.

Despite not having a shield and wearing what appears to be a weak armor set at this stage of the game, he is far from useless and is perhaps one of the most useful white phantom in the game. Boyd has a high amount of HP and can take tons of punishment before going down. Upon entering the boss fog gate, he will actively engage the first swarm of spiders before going after Freja. He will most likely distract Freja most of the time, enabling the player to attack or to heal. When Freja is focused on the player, Boyd will actively attack her other head as well. When low on health, Boyd can been seen using an Estus Flask to heal himself, something which most white phantoms do not do. However, keeping an eye on his health is important; if he is vanquished, the shifting of attention from Freja and every remaining Parasite Spider to the player may be overwhelming.

Considering the phantom's name and gear (Royal Soldier Set and Estoc), one might make the assumption he is a member of the raiding party sent to steal iron from Brume Tower.

Retrieved from "https://darksouls.fandom.com/wiki/Ashen_Knight_Boyd?oldid=329019"
Community content is available under CC-BY-SA unless otherwise noted.