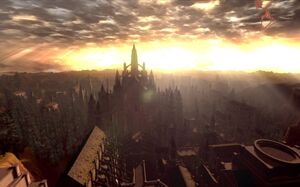 Anor Londo is a location in Dark Souls.

Anor Londo is accessible from a yellow Resonance Ring that appears in the arena of the Iron Golem after it has been defeated. It plays important role in gameplay, as Lordvessel is obtained here after defeating Dragon Slayer Ornstein and Executioner Smough and reaching Gwynevere, Princess of Sunlight. Two covenants can be joined in Anor Londo.

If the player wishes to return to Sen's Fortress, they may speak to the Batwing Demon that appears where the player is placed after activating the Resonance Ring.

The Giant Blacksmith is the only blacksmith that is able to create unique weapons from the Boss Souls gathered up to this point. To forge a unique weapon the player also needs to have the corresponding weapon upgraded to +10. The option will then be presented to use the Boss Soul to modify it into a new and far more powerful weapon.

If the player frees Lautrec of Carim, and allows him to live after reaching Blighttown, they will find that Anastacia of Astora, keeper of the Firelink Shrine bonfire, had been murdered. Examining her remains will grant the dingy clothing set (notable for its curse and poison resistance) and a Black Eye Orb to the player's inventory.

If the player arrives on the platform between the stairs opposite where the Silver Knight is located, the Orb will begin to resonate. It can then be used as an item to transport the player as a Spirit of Vengeance to Lautrec's realm. He will be accompanied by a mage and a pikeman. Lautrec's bodyguards only stand in the way, as he is main target, and is the only one who possesses items. Once killed, he will drop a single Humanity, a Souvenir of Reprisal, the Soul of Anastacia of Astora, and a Ring of Favor and Protection.

If the player decides to attack Gwynevere, she disappears in a dying animation. If the player has not defeated Gwyndolin beforehand, he reprimands the player; Anor Londo darkens, and all Sentinels and Batwing Demons disappear. The Royal Sentinels and the Silver Knight greatbowman in the main hall also disappear and are replaced by two non-respawning, hostile Darkmoon Soldiers. The Darkmoon Knightess awaits the player near the rotating platform. Killing her results in the first bonfire being unusable, but as with any extinguished bonfire, one may still warp to it. One important thing about Dark Anor Londo is, in human form, the player is susceptible to invasions (particularly from Blades of the Darkmoon), regardless of whether the player had killed Gwyndolin or not. Another thing to note about Dark Anor Londo is that within its bounds, the range in which a player may lock-on is decreased.

If the player is killed whilst in darkened Anor Londo, they are returned to the first bonfire regardless of whether they have rested there or not. A Homeward Bone will not return the player to any of the other four bonfires in the area. Whether it is a glitch or an intended function by the developers is unconfirmed.

If the player desires to fight Dark Sun Gwyndolin via an easy return to the boss area, it is preferable to either:

If the player has already darkened Anor Londo and killed the Darkmoon Knightess, the fastest method will be to run to the entrance way of The Duke's Archives (only accessible after placing the Lordvessel) and using the bonfire by the elevator to warp. 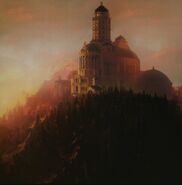 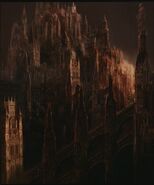 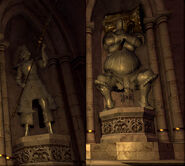 The statues of Ornstein and Smough, respectively

Traveling back to Sen's Fortress