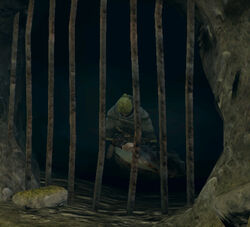 "Oh, have you seen that terribly morose lass? ...The Fire Keeper. She's stuck keeping that bonfire lit. Sad, really. She's mute and bound to this forsaken place. They probably cut her tongue out back in her village, so that she'd never say any god's name in vain. How do these martyrs keep chugging along? I'd peter out in an instant. Hah hah hah hah!"
— Crestfallen Warrior

Anastacia of Astora, also known as The Ash Maiden, is a Fire Keeper in Dark Souls. She keeps the bonfire in Firelink Shrine lit. She is voiced by Emma Pierson, who also voiced Dusk of Oolacile.

She can be found just underneath the bonfire, down the stairs located just to the left of the Crestfallen Warrior.

Initially, she is unable to speak for her tongue had been removed sometime long ago. Despite this, players can still interact with her. As with other Fire Keepers, Anastascia has the ability to reinforce Estus Flask levels in exchange for Fire Keeper Souls.

After retrieving the Fire Keeper Soul from Blighttown, or after both Bells of Awakening have been rung, Knight Lautrec of Carim will kill Anastacia, deactivating the bonfire in Firelink Shrine. Anastacia leaves behind the Dingy Set and the Black Eye Orb. The Black Eye Orb is an invasion item, allowing players to find and invade Lautrec's world to defeat him and retrieve Anastacia's Fire Keeper Soul.

Returning Anastacia's soul to her cage will revive her, reigniting the Firelink Shrine bonfire. Her tongue will also be restored, allowing the player to engage in conversation with her.

Once Anastacia is revived, if the player places the Lordvessel, offers at least one Lord Soul or Lord Soul Shard to it, and then talks to her, she will fully kindle the Firelink Shrine bonfire.

Anastacia is mentioned by several characters, including herself, to be "impure", mainly of speech. However, what exactly made her so unclean is never revealed, as she tells very little to the player even with her tongue restored. It has been hinted from item descriptions that Anastacia chose her own banishment and even imprisonment.

Her drops can only be obtained if Lautrec kills her.

Anastacia seen in the opening movie.
Add a photo to this gallery
Retrieved from "https://darksouls.fandom.com/wiki/Anastacia_of_Astora?oldid=328551"
Community content is available under CC-BY-SA unless otherwise noted.