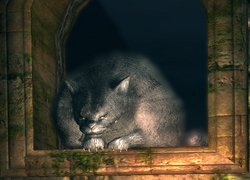 "Well indeed, thou art a strange one! Nevertheless, I feel some liking for thee. I'm Alvina of the Darkroot Wood. I command a clan of hunters who track down defilers of the forest graves. What dost thou say? Wilt thou not join us?"
— Alvina

Alvina of the Darkroot Wood is a character in Dark Souls. She is the leader of the Forest Hunter covenant. She is voiced by Ève Karpf.

Found on a window sill in some ruins in Darkroot Garden. The most direct way to get there is through the door opened by the Crest of Artorias and sticking to the left.

To join the covenant, answer "Yes" for all her questions. Answering "No" to her first question will cause her to shun the player. Hurting Alvina in any way will not kill her, but it will cause her to disappear. If players are in the Forest Hunter covenant, attacking her will also count as a betrayal and the NPC's in the forest will become hostile, including Shiva. It is possible to make Alvina neutral again by absolving sins with Oswald of Carim. Alvina will be present and repeat the covenant dialogue.

Killing one intruder as part of the Forest Hunter covenant will result in Alvina giving the player a Divine Blessing. Killing 3 trespassers of The Forest will grant the Ring of Fog.

Alvina had some connection with the Great Grey Wolf Sif (and possibly Knight Artorias).

Alvina claims that Artorias' legend is "none but a fabrication" and "but a fairy tale". However, her dialogue implies that she respects the knight, as she uses the title Sir Artorias to refer to him.

Alvina distrusts Shiva, fearing that he might use her covenant to accomplish his own ends. This stems from removed content from the game in which Shiva attempts to kill the player.

Alvina can be encountered briefly during the events of the Artorias of the Abyss DLC, in the Chasm of the Abyss. She cannot be interacted with, in the traditional sense, and has no dialogue.

She is found after falling through an illusory floor, and leads the player to an injured but protected Sif.

Elizabeth confirms Alvina's claim after defeating Manus by telling that Artorias killed him, stopping the Abyss. In doing this, she has fabricated Artorias' legend, just as Alvina had said.

Retrieved from "https://darksouls.fandom.com/wiki/Alvina?oldid=327226"
Community content is available under CC-BY-SA unless otherwise noted.