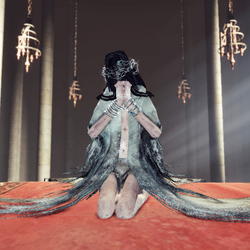 Alsanna, Silent Oracle is a character in Dark Souls II: Crown of the Ivory King. She is voiced by Clare Corbett, who previously voiced Maiden Astraea, the Undead Female Merchant, Gwynevere, Princess of Sunlight and Crossbreed Priscilla.

Alsanna is a mysterious child of the Dark, one of the many fragments of Manus, Father of the Abyss. At an unknown point, she traveled to the northern kingdom of Eleum Loyce, ruled by the Ivory King, and devoted herself to him as his oracle. An ancient Chaos was discovered deep below the land, so in an attempt to appease the raging flame the Ivory King built a great cathedral at its mouth and Alsanna prayed in silent vigilance. The attempt was unsuccessful, and the flames still raged.

Eventually, the Ivory King sensed the degradation of his soul and left Eleum Loyce without a word, leaving everything to Alsanna. He traveled deep into the Chaos until the flames devoured him.

Upon entering the Grand Cathedral, Alsanna can be found at the top of a flight of stairs, surrounded by frozen branches similar to those growing from the Bed of Chaos. She will give some background to the Ivory King and Eleum Loyce when spoken to:

"To think Aava could be bested... Who are you? This land is barren, Cursed by the old Chaos. It gave birth to atrocities, and the people fled in fear. Until our lord, the Ivory King, came."

"My dear lord, a most true king. It was with his magnificent soul that he built Eleum Loyce... and contained the spread of chaos. But the Chaos would not be sated, and the king gave his own soul."

"Inevitably, the king was drained of vigour, and plunged into the Chaos' heart. Eleum Loyce was frozen in time, its leader lost... I remain here, to contain the Chaos, honouring my Lord's wishes. Perhaps one day, he will return... There is nothing here, save that accursed flame..."

"I have but one wish. That my dear Lord might be freed from that unspeakable Chaos. I haven't the strength to help him myself, but perhaps one such as you... Though yet I am yet to know your name, stranger, will you lend me your strength?"

Agreeing to her offer, she replies: "Kind visitor, I thank you. Let me open the path to Chaos. And please, do all you can..."

Next, a beam of light breaks the ice below the staircase, blocking a room that houses a large pit leading to The Old Chaos. The message "Alsanna's seal is undone, and the winds of Eleum Loyce are ceased." will appear, indicating that various frozen parts of the city have now melted. She goes on:

"Many of Eleum Loyce's faithful knights followed their Lord into the Chaos. But not one of them returned. The King's dutiful subjects waited patiently for His homecoming. But it was too long a wait to bear... The knights of Eleum Loyce await a new leader. One who will guide them into Chaos."

This is an indication to locate the three Knights of Eleum Loyce so that they may provide aid against the Ivory King. Once the Ivory King has been defeated, Alsanna will thank the player and reveal some more of her background and her connection to Manus, Father of the Abyss:

"You've granted my one wish... Now, I have no regrets. I was born amidst the Dark. Long ago, in the depths of the Abyss, my Father perished. The Dark shattered into tiny pieces, one of which was me. How frightened I was. A frail thing, born from but a splinter of Dark. I felt that I might simply disappear."

"I am, in fact, the incarnation of my Father's fears. I sought an anchor, and I saw that a King of this land was strong. I sought him only to sustain myself, to smother my fears... Now, I realize that he may have known all along. I was born of fear, and my Lord provided comfort. And so here I remain, heiress to my Lord's wishes, watching over Chaos... until the end of time."

After the King's defeat, Alsanna will mention: "The knights of Eleum Loyce were swallowed by the Chaos... where their souls still remain. I pray for their deliverance." This prompts the side quest to collect Loyce Souls in exchange for pieces of the Loyce Set and eventually her soul.

Every time a Loyce Knight soul is returned to her, she says: "I sense a knight's joyous elation. Kind visitor, please accept my gratitude." Progressively, the formations of ice blocking the stairs will break the more souls are returned. Once 15 souls have been returned, she states:

"The beings born from the shards of Dark... I am not the only one. Even Dark seeks solace, and more so, souls. Magnificent souls... like your own... One day, you may encounter another. Another being, born of Dark."

Once 50 souls have been collected, the final pieces of ice break, allowing the player to meet her. She sits at the top of the staircase, kneeling in prayer. When spoken to, her dialogue will allude to her sisters, Nashandra, Elana and Nadalia:

"Kind visitor. I am not the only being born of Dark. You will face hardships like no other. Take this. My sisters are as a thick Dark, their lust for souls insatiable... May you find the will to resist their desires..."

Once she grants you her soul, she finishes with: "Go on, kind visitor. May you reach your journey's end, one day."

Retrieved from "https://darksouls.fandom.com/wiki/Alsanna,_Silent_Oracle?oldid=329007"
Community content is available under CC-BY-SA unless otherwise noted.