Edit
watch 01:34
Boss Spotlight: Aldrich, Devourer of Gods
Do you like this video?
Play Sound

Cinders of a Lord
Soul of Aldrich
Aldrich, Devourer of Gods, also called Aldrich, Saint of the Deep, is a boss and one of the five Lords of Cinder encountered by the Ashen One in Dark Souls III.

When Aldrich ruminated on the fading of the fire, it inspired visions of a coming age of the deep sea.
He knew the path would be arduous, but he had no fear. He would devour the gods himself.

The opening cinematic reveals that Aldrich has become an expansive sludge of maggot-ridden rotten flesh, humanity dregs, and his own bones as well as those of the victims he has consumed.

By the time the player reaches him, he will be inert and spread across the floor, using the weapons and malformed body of Gwyndolin to interact with his environment and perform attacks.

Aldrich is found in Anor Londo in the same cathedral hall where Ornstein and Smough were fought in Dark Souls.

Legend states that he hailed from Irithyll[1], although his original physical appearance lacked the typical features of the old gods, suggesting that he may have been just a human.

Formerly a holy cleric, he began to foresee an age of the "deep sea," where the dregs of the human soul fall to their lowest depths and become the shackles which bind the world.[2] Through these visions, Aldrich was able to reach a level of the Dark generally inaccessible to humanity, which subsequently came to be known as the "Deep".[3] Aldrich eventually developed a habit of consuming humans, an act in which he delighted.[4] His cannibalism allowed him to grow more and more powerful, so he was chosen by the Church of White as the next Lord of Cinder despite his corrution, as he was not chosen for his worthiness, but for power he held.[5] Because of this, he was allowed to indulge in his vices and provided him with a steady stream of sacrifices, an operation overseen by Archdeacon McDonnell and Archdeacon Royce.

Building on these visions and powers, Aldrich shared his thoughts with the Archdeacons and actively pursued the corruption of human souls.[3][6] During this time, he continued to indulge in the misery of those he consumed, and even created sacred rings that bestowed that same feeling to wearers.[4] But while the powers in the Deep are beyond pure humanity, so too is its potential to do grave harm, breeding abhorrent life beyond abyssal corruption.[7][8] Most of those who worshiped the Deep would eventually become intoxicated[9] or corrupted, all except for Aldrich, who, despite his taste for flesh, retained sanity somehow. He was not immune however, and his devouring of both flesh and souls bloated him with dregs until he collapsed in on his own polluted form, becoming a mass of abyssal sludge, animated by darkness.[5] Despite this, he retained sanity and sentience, and was still given his sacrifices.

It is implied that Aldrich had many children, and that Anri and Horace were the only children to escape the Devourer.[10][1]

After Aldrich was revived as one of the Lords of Cinder, he foresaw the world's inevitable envelopment in darkness, and neglected to take his throne. He began dreaming of the Old Gods, who supported the linking of the fire, and sought to devour them. He gathered his clerics and McDonnel and marched against Irithyll, massacred Sulyvahn's knights and took control of the city. The Pontiff was forced to surrender Gwyndolin and grant the cannibal the access to Anor Londo : there Aldrich began consuming the God of the Darkmoon.

As Aldrich took to devouring Gwyndolin's body, he appears to have entered hibernation, falling into a deep slumber. In his sleep, Aldrich was also able to absorb Gwyndolin's memories, as he dreamed about a young, pale girl in hiding.[11] When the Ashen One arrives to slay the devourer, Aldrich awakens to defend himself, utilizing Gwyndolin's powers/body and a miracle developed from his dreams.

The encounter begins with Aldrich standing on the far end of the room, imbuing his staff with magic and wielding it menacingly while he prepares for battle. He specializes in ranged combat, doing so by casting diverse dangerous magical spells. Conversely, his close combat abilities become heavily compromised due to his sluggish mobility and tendency to miss hits with his weapon. His substandard melee abilities should not be underestimated, however, because what he lacks in accuracy, he more than makes it up in damage-dealing potential.

When he rears up and aims his bow, he will launch an expanding wave of highly damaging arrows in front of him, allowing you to circle behind him and get hits in.

Throughout the course of the battle, Aldrich will be constantly summoning small homing projectiles. Each one of these, on its own, only deals a small amount of damage and the player may even opt to sustain a few of them in exchange of inflicting some damage to the boss. However, if they are caught by the full attack, they will sustain heavy damage, which may even kill them in a single barrage.

Aldrich is most vulnerable on his tail, which provides an area where the player may attack without risking themselves too much from being in the staff's range.

Upon receiving some damage, Aldrich will raise his staff and create a big vortex on the ground in front of him, plunging inside to escape from punishment. This vortex is heavily damaging and the player would be wise in not attacking the boss too many times in a row, preparing instead to move away when it is cast. Aldrich will emerge a moment later on the other side of the hall, as far away from the player as possible, trying to buy some time to cast more spells.

Once Aldrich has lost about 40% of his health, he will buff his scythe with fire. At this point, every time he emerges from the ground, he will deal damage to nearby players while a much greater amount of homing projectiles spawn with him as he rises.

He will also use a replica of the Lifehunt Scythe, starting a large windup before spinning twice in a full circle, and stealing health with each target that it connects to. This attack is telegraphed, and one can see the miracle generating on his staff, but it can often be confused for another standard swing.

His most devastating attack is, without a doubt, is taking out Gwyndolin's bow and shooting toward the sky, making an extensive barrage of arrows rain over the player and follow them for a considerable amount of time. He telegraphs this attack by suddenly stopping and erecting his upper body, while a white flash of light emanates from him. Being caught under the rain of arrows, practically means instant death. As soon as this attack is detected, the player is advised to completely disengage from battle and start running throughout the room with no specific direction.

At the beginning of the fight, charge at Aldrich to avoid his hard-hitting soul spear. Get behind him and focus your attacks on his tail. This leaves him with nothing to do but swing his two slow, devastating melee attacks or teleport across the room (usually, adjacent to where he teleported from).

At about 55%-60% health, he will teleport and come back up, buffed with fire. His arrows also go from going forward to following a specific player. If the arrows following the player catch up to them, then that player will most likely go down quick. Blue Bug and Red Bug Pellets are recommended for this fight.

Casting the sorcery Twisted Wall of Light can negate Aldrich's ranged attacks, including his arrow barrage in the second phase, allowing one to wait out the attack by casting repeatedly. 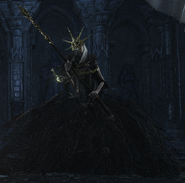 A passive Aldrich before entering the boss room. 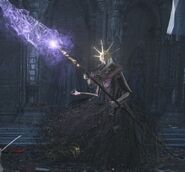 Aldrich's form during the boss fight.

Aldrich's true form as it appears in the opening cinematic.

Aldrich as a scryer in Ishra 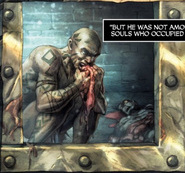 Aldrich as seen in Parnethia