Edit
watch 07:49
'Dark Souls II' Lore: Aldia, Scholar of the First Sin
Do you like this video?
Play Sound

"Many monarchs have come and gone. One drowned in poison, another succumbed to flame. Still another slumbers in a realm of ice. Not one of them stood here, as you do now. You, conqueror of adversities. Give us your answer."
— Aldia

Aldia, Scholar of the First Sin is an optional boss as well as a character in Dark Souls II. He is voiced by David Gant, who also voiced Oswald of Carim in Dark Souls.

The Scholar of the First Sin appears to be a giant, charred human head covered in flames and large branches. The ground around the Scholar will be on fire. There is a single red orb near the center of his body, which is possibly an eye. His head and shoulders are all the Bearer of the Curse sees as he rises from the ground, but this could imply that there is a body below it, invisible to the player.

Aldia is the elder brother of King Vendrick, and aided his brother in founding the kingdom of Drangleic.[1] He secluded himself in his manor, searching for secrets of life, viewing the Undead as the key to finding it.[2][3] For his reverence of the Undead, Aldia was shunned by Vendrick, banished to his Keep forever.[4] People who were invited to his manor commonly disappeared and were replaced with malformed beasts.[3] The Southern and Northern Ritual Bands were created by Aldia after cruel, horrible experiments were performed on these people.[5][6] Many valuable objects came out of Aldia's Keep, including the Sunset Staff,[7] the Spitfire Spear,[3] Soul Geyser,[8] Unleash Magic,[9] and Forbidden Sun.[10]

Through his experiments, Aldia sought to learn the nature of the undead curse, and to shed the yoke of fate.[11] He failed, however, and turned into a monstrosity, inhabiting the bonfires.[11]

Aldia serves as a lore-centric character, alluding to a great deal of things in relation to the lore of Dark Souls II.

Aldia is immobile when fought, but is able to teleport, releasing an area of effect attack around the area he teleports to.

The Fire Orbs have moderate tracking, so rolling may be needed to fully evade. Forbidden Sun can be cast in any direction, even directly behind him. The Fire Orb and Forbidden Sun attacks can be avoided by rolling, strafing around Aldia or running perpendicular to their trajectory.

The withered tree branches he utilizes inflict physical damage only, making them especially prone to being blocked. At a distance, the branches extend out of the ground in a path in front of him, with moderate tracking, making it harder to roll out of the path of the attack. This is easily noted when one rolls away from the attack, but gets grazed by one of the branches, yet doesn't flinch or stagger upon getting hit.

Throughout the fight, Aldia will surround himself in a fiery aura that makes close contact with him difficult without the risk of dying to the flames. However, an ultra greatsword can still reach. This aura also bolsters his own defenses, reducing the damage he receives from all attacks by a significant amount. The fiery aura fades when he performs certain moves, giving the player a small window to attack up close. The first opening is just after he teleports to a new location, and the second is when he is charging up his Forbidden Sun attack.

When Aldia has about half of his health left, he will buff himself, intensifying the flames that cover him. He will keep this form throughout the battle. At this point, he'll start combining various of his previous attacks and cast them in succession.

Fire Orbs:
Aldia will fire out four orbs of dark fire, placing them above his head. After a short time, the orbs will begin homing in on his target. He can cast this multiple times in a row. How to avoid: block with Gyrm Greatshield or roll a few times.

Dark Forbidden Sun:
Aldia charges a large dark fireball above his head. While he does this the fire around him will disperses leaving him vulnerable. Attack him while he's charging. How to avoid: the fireball is rather easy to dodge if you roll away right before it hits.

Tree Root Dance:
Aldia slams a root into the ground, causing numerous tree roots to protrude from the ground, moving towards the player rapidly. Just like the Fire Snake pyromancy. How to avoid: the roots start appearing right in front of Aldia at the center; a root never appears twice in the same location. Knowing this, first stand closer to his left or right side to avoid the initial roots, then quickly move to stand right in front of him, where the first roots appeared, and the other roots won't be able to follow you.

Circular Tree Root Dance:
Aldia slams a root into the ground, causing numerous tree roots to come out of the ground around him, not moving towards the player. How to avoid: watch the fire patches appearing on the ground before the roots and move away from them.

Teleport:
Aldia can teleport at any time. Upon finishing a teleport, he emits an area of effect attack immediately. How to avoid: watch the red light that appears at the location where Aldia is teleporting, then stand back to avoid the blast (similar to Smelter Demon's fire blast). After that immediately run up to him to land a few hits before his flames go up.

With the introduction of Scholar of the First Sin, a great deal of lore-centric dialogue was added to the game, changing much of the preconceived lore. The deformed Aldia is encountered several times by the Bearer of the Curse. His dialogue ranges from benign to going as far as to express outward rage at Gwyn, Lord of Cinder. He is referred to by Aldia as the "Lord of Light". The scholar describes how the old Lord of Sunlight expelled the darkness, and began the cycle of light and dark. This cycle, this curse, forced men to assume a fleeting form, reverting them back to their hollow form. They became less than what they were, and to Aldia, this is the first sin he has taken his name from. He claims that men are mere props, and that no matter how exquisite, a lie will remain a lie. The anger is audible in his voice at this point, an expression of his fury at the commitment of the first sin, the first linking of the flame.

The scholar alludes to the fates of the three kings, whether or not the player has played through The Lost Crowns DLCs. He speaks also of Vengarl of Forossa. When questioning what drives the player, he mentions that: "One man lost his own body, but lingers on, as a head."

Aldia (on fire, prior to buff)

Aldia at the Dragon Shrine 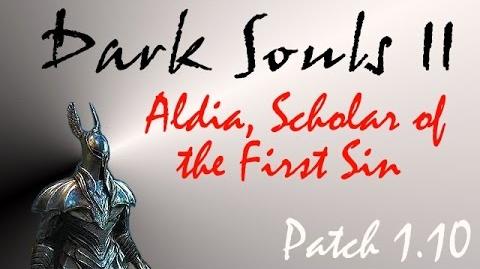