Edit
watch 02:04
Who Are The Abyss Watchers?
Do you like this video?
Play Sound

Cinders of a Lord
Soul of the Blood of the Wolf
The Abyss Watchers are a collective boss in Dark Souls III, and one of the five Lords of Cinder encountered by the Ashen One.

It is unknown whether one or all of the Abyss Watchers linked the fire. Perhaps they worked as a team to push back the darkness.

The Abyss Watchers are a legion of troops that all wear a distinctive armor consisting of leather over chain mail, a long cloak, and a distinctive, pointed helm. They are known for combating and ridding the world of the Abyss, and whatever comes from it; and are believed to serve in the name of Artorias the Abysswalker, who was sworn to the same duty.

All of them use a greatsword and carved dagger. The dagger is not primarily used for offense, or even parrying, but as a hook for the Watchers to utilize their wild, unpredictable fighting style.

By the time the Ashen One encounters the Legion, they are mercilessly fighting one another, seemingly because some of the remaining Watchers have gone mad from exposure to the Abyss, hence their glowing red eyes.

Found at the end of Farron Keep, from the Farron Keep Perimeter bonfire (which is near two Darkwraiths fighting multiple Ghrus). From there is a stone path (or alternatively a side path along the right exit of where the bonfire is) where the Ashen One will encounter closed chamber doors were the fighting of the Watchers can be heard.

The Abyss Watchers were the main component of the Undead Legion of Farron, a special fighting force formed to combat the threat of the Abyss. Taking inspiration from the Wolf Knight (Sir Artorias, the Abyss Walker), the Abyss Watchers themselves sought to utilize the techniques of Artorias, and partook of wolf blood to do so. Now equipped with the strength of Artorias, they became intensely strong and agile, fighting in a coordinated and sporadic pack akin to wolves.

Though the Legion was not inherently evil or overtly violent, at the slightest threat of the Abyss the Watchers would go so far as to decimate an entire territory. Their distinct outfits, topped off with a tall pointed helm, became an ill omen for any who saw them. Their wolf-blood fighting style was enhanced by the revolutionary use of an ultra greatsword modeled after Artorias' sword along with a carved dagger, utilizing the dagger as support for them to develop their own unique, highly agile fighting techniques that were even more unpredictable and vicious than their predecessor. As such, they disdained the use of shields and preferred a constant offense.

Their wolf blood did more than enhance their bodies, but their very essence, for all those who partook in it were linked to the soul of Artorias himself. As such, instead of each body hosting distinct souls, all that partook the wolf blood share the one soul distributed among them.

Along with the actual Abyss Watchers, the complete Undead Legion consisted of two other levels. To assist them, the Abyss Watchers recruited acolytes, who provided support via miracles and sorceries.  At some point, they made a pact of uncertain terms with one of the Crystal Sages of the kingdom of Lothric, who agreed to come to their headquarters in Farron and train their acolytes in sorcerous arts. Due to the Legion's emphasis of speed over physical power, they asked the skilled sorcerer to develop unique variations of existing sorceries for the acolytes to use. Some of them were made by a scholar named Heysel, the daughter of the head acolyte, and refined even further than that.

Perhaps the most telling of their fall were the number of foot soldiers tasked with the covert disposal of corrupted members, as the Abyss would slowly alter them, so the "Followers" as they were called would be sent to execute them before they were transformed into creatures. Their primary technique was to surround the target, burning and stabbing them, and finishing them with honor by throwing a spear to kill them.

Eventually, the Watchers linked the Fire, although it is unknown if one or all had done so, but had returned as Lords of Cinder.

Beneath their home in Farron Keep, is the Catacombs of Carthus, which contain a chalice holding High Lord Wolnir, who fell to the Abyss long ago. Along with the cindered Smouldering Lake, nearby is the Cathedral of the Deep, resting place of Aldrich, Devourer of Gods.

With nothing to live for after the Abyss Watchers linked the flame, the Followers went hollow, roaming the land and eventually disappearing into the Painted World of Ariandel. Since there were none to execute the corrupt, the acolytes were slowly devolved by the Abyss, and Farron was consumed in a rotting bog. Once the Abyss Watchers had awakened, their home was corrupt and their mission unsuccessful. The Watchers in the keep now fight against themselves; endlessly slaying their brethren corrupted by the Abyss.

The fight consists of the player fighting a lone Abyss Watcher, who is present during the entire battle. More Abyss Watchers will awaken to join the battle as it progresses. These Watchers are much more fragile than the main Watcher, but they can still deal a considerable amount of damage, especially when multiple attack at once.

Every other Watcher that awakens, starting from the second, will be red-eyed and hostile toward other Watchers. They can directly attack the player or each other, but they will mostly focus on the other watchers. These Watchers can be used to the player's advantage, as they assist in dealing damage and taking aggro. As such, it may be a good idea to switch to a more defensive playstyle while the player waits for these Watchers to even out the odds.

The main Watcher, although carrying a greatsword, is extremely fast and dexterous. He is constantly jumping around and evading the players swings by doing so. He will also try to take an advantage by swinging his greatsword around the floor of the arena. Never let your guard down, each and every attack can take you by surprise.

Depleting the main Watcher's HP will trigger a cutscene, which shows the main Watcher absorbing power from the corpses around the arena. After this, the second phase of the battle commences.

At this point, the Watcher's sword will ignite, causing it to deal additional Fire damage and leaving trails in the floor that erupt into large pillars of flame. The Watcher himself will also take on an Embered appearance, revealing his true form as one of the Lords of Cinder.

The other Watchers no longer rise during the second phase, but the main Watcher is considerably more aggressive and powerful. The fight plays out in a similar fashion, but most of the Watcher's greatsword attacks are altered in some way. Killing the Watcher at this point will end the fight, but dying will reset it entirely, requiring the player to beat the first phase again.

As seen in the intro cinematic.

The Abyss Watcher rising after becoming a Lord of Cinder.

The Abyss Watchers in combat. 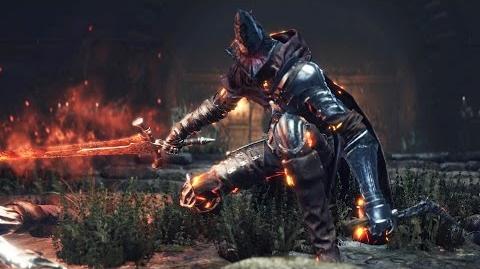 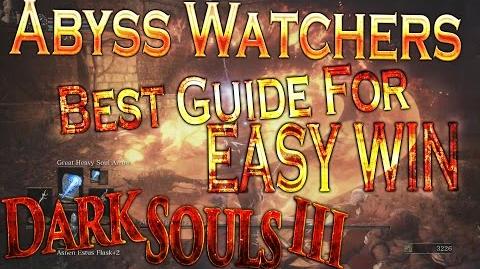 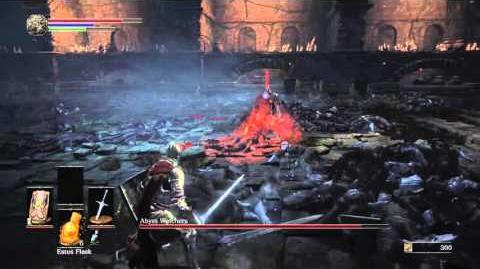