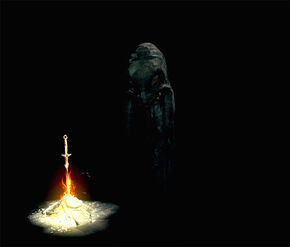 "The Darkwraiths reside in a dark void called the Abyss. But the Abyss is no place for ordinary mortals. Although long ago, the knight Artorias traversed the Abyss. If you can find him, and learn from him, the Abyss may prove surmountable."
— Ingward

The Abyss is a location in Dark Souls.

The Abyss is a realm of Dark born from Manus, the "Primeval Man" / "Father of the Abyss", the borders of which border the mortal world, while slowly absorb everything in its path; it is uninhabitable to all beings aligned with Fire including the Gods, as they require special equipment or protection to prevent corruption (both in the spiritual and physical sense). In contrast, any beings aligned with or are indifferent to the Abyss (such as Humans) are able to roam it with no risk of harm or corruption.[1]

Knight Artorias famously traversed the Abyss and hunted the Darkwraiths therein.[2] He was protected by the power of a magical ring, which he gained after making a covenant with the beasts there.[3] The ring prevented him from being swallowed by the void, but it led to his sword becoming cursed.[4] In recognition of his actions, he was awarded one of Anor Londo's treasures, a Silver Pendant that allowed him to repel Dark sorceries;[5]eventually he traveled to Oolacile to combat the threat of Manus, but in saving his wolf companion Sif, he was overtaken by the dark.

The Abyss would later terrorize Carthus, and one of its victims would be their king Wolnir, who would discover within it a black flame and create dark pyromancies from it.[6]

The Abyss is located at the end of the New Londo Ruins. To reach to the Abyss, the floodgates must be lowered and the Covenant of Artorias ring, a reward for killing Great Grey Wolf Sif, must be worn. After climbing down a spiral staircase within a tower, the path will abruptly end, making it necessary to descend into the darkness of the Abyss.

Darkstalker Kaathe will appear after the boss has been defeated. The player cannot have given the Lordvessel to Kingseeker Frampt yet. 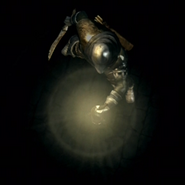 The floor of the abyss as seen with the Skull Lantern.

Abyss bonfire with Kaathe.
Add a photo to this gallery

Retrieved from "https://darksouls.fandom.com/wiki/Abyss?oldid=338077"
Community content is available under CC-BY-SA unless otherwise noted.