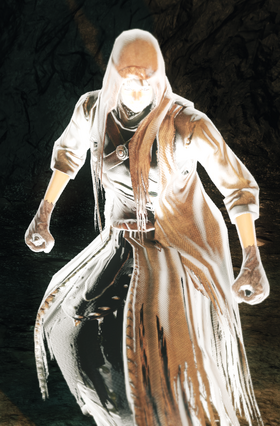 Abbess Feeva is a white phantom appearing in Dark Souls II: Crown of the Sunken King and Crown of the Ivory King.

She is available for summoning in the fight with Sinh, the Slumbering Dragon. Her summoning sign can be found in the Dragon's Rest, across from Transcendent Edde's summoning sign.

She is available for summoning in the fight with Lud and Zallen. Her summoning sign can be found at the beginning of Frigid Outskirts, near the statues.

She dons the Saint's Hood, Saint's Dress, Priestess Gloves and Priestess Skirt, and also uses the Chime of Want.

She only uses miracles such as Great Lightning Spear and Blinding Bolt in combat, can cast Sacred Oath and will heal the party with Soothing Sunlight if a party member's HP is reduced to a dangerously low amount. Considering Sinh has fairly high elemental defenses, she doesn't have the ability to do sufficient damage to the dragon, so her strong points are supporting the party and tanking hits.

Retrieved from "https://darksouls.fandom.com/wiki/Abbess_Feeva?oldid=324891"
Community content is available under CC-BY-SA unless otherwise noted.